Request for President Wilson's approval for the war program of the Camp Fire Girls.

As soon as the United States entered the world war, the Camp Fire Girls suggested a war program for all girls in war time, which you most graciously approved. Inspired by your approval the Camp Fire Girls have faithfully followed your leadership and have done all you have asked them to do. Ninety three thousand three hundred fifty six of them contributed and cooperated with the Red Cross; eighty thousand four hundred forty eight maintained gardens; forty seven thousand six hundred ninety cared for little children. They realize that the days ahead are as critical in our national life as the days behind us and they have, therefore, subject to your approval, adopted the following program for the days of reconstruction. This program is based on the principle that girls have a special work to perform in the history of the nation quite distinct from the work of boys because the girls are the mothers of the new generation slogan: Give to your country health wealth and womanhood:-

Yours for one hundred thousand Camp Fire Girls who are eager to enter into any service you may approve, with energy, seriousness and joyful enthusiasm, 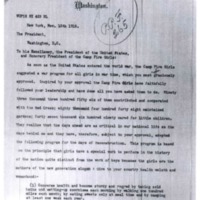