Following are remarks made by the French Foreign Office on previous peace conferences:

The offices of President and Secretary are both of great importance and appertain invariably to the power where the plenipotentiaries are assembled.

The plenipotentiaries for each power are few in number in order to facilitate negotiations, avoid lengthy discussions and diversion of views between delegates of the same power and indiscretions.

The representatives of the states are either the Chancellor or Prime Minister or the Minister of Foreign Affairs.”

NOTE: I do not understand this.

Following is a scheme of procedure as suggested by French Foreign Office:

Two. Representation of the Powers and of the States.

A place must also be reserved to the theoretical belligerents: China, Brazil, South American States (Cuba, Panama, Guatemala, Nicaragua, Costa Rica, Haiti, Honduras, which might be represented by the United States to avoid crowding) Liberia.

Then will come the question of the new States recognized by the Allied Powers: Poland, Bohemia.

Some determination must also be taken in regard to our Allies who have treated with the enemy (without our recognizing these treaities) Roumania, Russia.

What form of representation shall we accept for the states in formation, non-recognized by us: Yugo-Slavs, Finns, Ukranians, Lithuanians, Esthonians, Lettons, Arabs, Armenians, Jews of Palestine.

Certain regulations interesting neutrals having to be examined the Congress, it is expedient to provide for the presentation and protection of their interest: Norway, Sweden, Denmark, Netherlands, Luxemburg, Switzerland, Spain, Persia, Ethiopians, Mexico, Argentine, Chile, and other neutral states ( Bolivia, Peru, Uruguay, Eucador - in a state of severance of diplomatic relations, - and Columbia, Dominican Republic. Paraguay, San Salvador, Venezuela). - NOTE: Query?

Evidently there can be no idea of allowing neutrals to discuss territorial rearrangement, indemnities and guarantees but on the other hand it is impossible to exclude them from the debates concerning the future international organization to which their adhesion is desired. - NOTE: Ought not claims of neutrals against belligerents to be provided for in some way? Otherwise full justice will not be done.

THREE. PROCEDURE AND ORGANIZATION OF THE OPERATIONS.

Provision will have to be made for a first unofficial examination by the great powers (Great Britain, France, Italy, United States) of the questions to be discussed, examination which will lead to the preparation between them of the preliminaries of peace and the whole mechanism of the Congress of peace. - NOTE; This has the old element of danger which existed in the Concert of Power, and yet to prevent confusion some method of the sort must be adopted. It smacks of “secret diplomacy” and will doubtless invite that criticism by the smaller countries.

The work should evidently be divided among preparatory commissions formed only by plenipotentiaries (with the assistance of legal experts, financial, geographic, military, naval, industrial and commercial experts, possessing consultative vote). - NOTE: Is this work limited to the four powers?

It may be foreseen that the three general plenipotentiaries who will deal with the settlement proper of the war will appoint as assistants one or two representatives more particularly qualified to study the principles of the league of Nations, that is to say, the stipulations of general public law which shall constitute the second great task of the Congress.

The three general plenipotentiaries (in accordance with the precedents mentioned herein above) might be for France: The Prime Minister, the Minister for the Foreign Affairs, the Generalissimo.

The necessity of defining the limiting the delegations of the powers is imperative in order to avoid for instance the individual representation claimed by the important English colonies (a principal which cannot be allowed, for why should not a similar claim be presented by each of the different states composing the federation of the United States). - NOTE: I quite agree as to this principle, and I have the impression that the suggestion of 7 members originated with the British, so that Canada, Australia and South Africa might each have a representative, though G. Britain would maintain the majority of 4 members.

FOUR: PRINCIPLES AND BASES OF NEGOTIATIONS.

Similarly to the Congress of Vienna, leading principles should be proclaimed:

Such a declaration has the advantage of freeing the allies from any previous imperialist aims: the necessity of abolishing the agreements with Russia (which would comprise the cession of Constantinople to that power) would in itself (assure?) the adoption of such a measure.

As to Italy, should she not adhere thereto, it would be difficult to see how she could be admitted into the discussion: having previously to her entry into the war presented to the Allies minutely detailed conditions for the advantages she desired to derive therefrom, she would only be entitled to discuss the affairs of the others if she herself allowed discussion upon her extensions. - NOTE We must not forget the hostility and jealousy between France and Italy, and that this is France’s plan.

Finally, this Congress, like all those which have preceded it, should adopt a basis of discussion. It cannot, like the previous ones, lean upon the stipulations of a treaty, inasmuch as hitherto the Powers have only concluded armistices (with Bulgaria, Austria-Hungary, Turkey and Germany, which cannot serve as a basis discussion.

One single basis seems to exist at the present time: it is the solidary decision of the Allies upon their war aims, formulated January tenth 1917, in answer to the question of President Wilson, but it is rather a program than basis of negotiations.

It would therefore seem indispensible that the Prime Ministers and the Ministry for Foreign Affairs of the four great powers meet previously at Versailles to settle between them the affairs which the Congress shall have to deal with (that is to say, the preliminaries of peace) and the other in which they shall be discussed as well as the condition of the sittings of the Congress and its operations.

In a general way the questions to be discussed are segregated in two main series: First settlement proper of the war, second elaboration of the league of nations.

This distinction would limit to the parties really interested the discussion of the essential and immediate questions to be settled and, wards the interest of a large number of states to discuss the general principles of the organization of the world to which their participation has been convened.

NOTE: What does the last clause refer to?Protectorates Neutral States?

NOTE: Does this not cover Pacific Islands?German owned concessions in China?

Military guarantees on land and sea, number of troops, dismantling of fortifications, reduction from war factories, territorial occupations, etc. - NOTE: Is this disarmament. If so, how about naval forces? Sec. 5 under B (“League of Nations).”

Six: Reestablishment of the conventional regime upset by the war.

One. League of nations (fourteenth of Wilson proposition.

Two: Freedom of the seas (second Wilson proposition). - NOTE: Does this include a revision of the Rules of War on land, on sea, and in the air?

Three: International economic regime (third Wilson proposition - NOTE: should there not be some arrangement for codifying the principles of international law?

Four: Publicity of treaties (first Wilson proposition) - NOTE: Should not the subject of international arbitration be reviewed in connection with a league of nations?

I should appreciate very much if you will be good enough to telegraph me as soon as practicable any modifications, additions or suggestions you may care to make to me upon the above scheme of procedure. 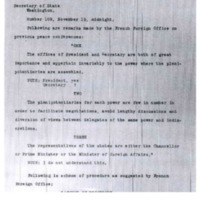