Permit me to extend heartiest congratulations to you and our country on the close of the awful war to which you contributed more than any other human being. Your every move connected with it received my cordial approval, and I supported you with pleasure and pride. Your past is secure, and no actor in the world’s drama of the last fifty years holds a place beside you.

It is in regard to the uncertain future that I venture a suggestion, which I hope you will follow, and am sure you will accept as coming from a real friend, to-wit: that you appoint Ex-President Roosevelt a member of the Peace Commission.

I am aware of his bitter animosity towards you, and of the unjust, often false, statements and criticisms against you and our party in which he has indulged ever since the war began four years ago. But you have shown more than once that you are big enough to lay aside personal feelings, and do what is best for Democracy and the nation.

A notable recent instance was the appointment of your late opponent for the presidency, Justice Hughes, to conduct the Air Craft investigation, and lay bare any scandal that might exist, no matter who was reached thereby. This action closed the mouths of Republican critics, prevented what might have developed into a bad scandal, and in every way has demonstrated your wisdom.

You can shut up Mr. Roosevelt by placing him on the Peace Commission; the American people as a whole will approve such action highly, and you will secure the service of a singularly able man in helping to solve many of the most difficult problems that ever confronted the human race.

Mr. Roosevelt showed great qualities as a diplomat and world statesman in connection with the Russo-Japanese war, and justly earned thereby the plaudits of mankind. His extensive travels abroad, wide acquaintance, general culture, and the esteem in which he is held by foreign countries combine to fit him peculiarly for this task. If appointed, in my opinion, he will throw himself into it with his whole heart and soul, and become the champion of your peace policies instead of their bitterest critic.

Of course, you should be very careful that the majority of the Commission are your real friends, and men of force who will not be swayed improperly if Roosevelt should attempt such a thing.

Mr. President, I firmly believe you have a great opportunity in this matter to serve mankind, the American union and the Democratic party.

With sincerest esteem and good wishes, believe me,

P.S. I leave for Washington next Sunday, the 17th inst. JER 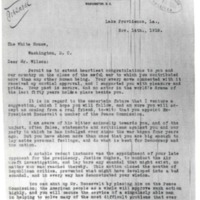