Americans need to be in charge of the food aid they will distribute in Europe.

With regard to various telegrams yourself and Cravath on relief to areas lately under German control on further consultation with President he authorized the following further statement to be made to our officials in Europe for their guidance but not for communication and asks that a copy should be sent to Colonel House and Cravath. Statement begins: We consider ourselves as trustees of our surplus production of all kinds for the benefit of the most necessitous and the most deserving. We feel that we must ourselves execute this trusteeship that we are not unmindful of the obligation which we have to the sustenance of those who have fought with us against Germany and that together with the necessities of those populations released from the German yoke we feel that they may well deserve a priority in our distribution. On the other hand we cannot undertake any cooperative arrangements that look to the control of our exports after peace and furthermore and equally important that the interallied councils hitherto set up in Europe were entirely for the purpose of guiding interallied relations during the period of the war and that any extension of their functions either by way of their control of our relations to other nations or the extension of their present functions beyond peace cannot be entertained by us. All relationship involving the use of American food or credit for the people of other nations than the Allies themselves must await Mr. Hoovers arrival in Europe. So far as any such supplies or interests of the United States is concerned in which we coordinate in every proper way (end of Statement). You can inform Sir Worthington Evans that the form of organization involving coordination of the United States government for distributing its food commodities arising in the United States through the various parts of Europe lately under German subjection can only be settled upon my arrival. That the United States Food Administration is taking steps to at once largely increase the volume of American food stores at various points in Europe in order that the material may be available and that we have every desire for proper coordination of all efforts. 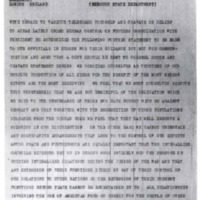