Meeting on economic reconstruction by US states.

In view of the pending armistice and possible suspension of the war program, it seems that the War Industries Board has decided to change the character of the meeting on Monday and to take up with the representatives of the State Councils the problem of industrial and economic reconstruction. A dinner has been arranged for Monday evening at which these problems are proposed to be discussed. Invitations to several of us in the Council have been extended, indicating phases of the reconstruction problem which it is desired to have us discuss at the dinner. Secretary Houston and I this morning discussed the question with considerable anxiety and agreed that the matter ought to be called to your attention for fear that embarrassment might arise out of it.

The Council of National Defense has for some time been collecting the data on and literature of reconstruction, but of course has not formulated a comprehensive policy, and equally, of course, would not announce any such policy without first submitting it for your approval. If at the dinner on Monday night plans for and theories of industrial reconversion, labor employment, army demobilization, etc., are discussed, quite active discussions in the newspapers will of course follow, and it may well be that the administration will be assumed to have determined on courses of action which have not yet been worked out and do not form any part of a program which you have as yet adopted. It might also meet with the suggestion that various emergency instrumentalities are designed to continue under fresh legislation for post-war activity, and suggest to the Congress agitating jealousies which may not be necessary if, in fact, upon mature consideration you do not decide to seek legislation retaining all of the instrumentalities in question.

It may well be that part of the anxiety which Secretary Houston and I feel on this subject is because neither of us feel that we have seen far enough into the perplexing problems of reconstruction to talk safely about it, and that we are therefore distrustful of the wisdom of their being any talk which, coming from official persons, may look like a settled program on a subject yet to us filled with deep uncertainties.

In any case, both of us felt that we ought to call this matter to your attention so that you could, if you felt it wise, get Mr. Baruch to indicate his whole thought in the matter to you and be restrained by your judgment in the themes and extent of the discussion at the dinner. 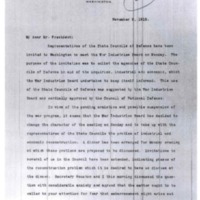