Quotes from Ludendorf about how armistice will strengthen imperialist German view.

Turkey is not worth mentioning

Disorganization of troops makes it difficult to say how much they can be counted on but in any case we will surely (*) line of Meuse for some time. We are prepared for worse, realizing our tired soldiers will have hard time repulsing victory-flushed Allies. We think Allies will attack along the line Lille-Brussels-Liege and also north of Verdun toward Thionville and the Palatinate.

Verdun front worries us greatly because it most threatens Germany and we are sending there all divisions at our disposal as result of shortened front and recall troops from foreign lands. I do not know how many divisions we have there but possibly 50 or 60. They will hold Americans and French.

Our retreat has been greatly helped by failure of Allied aviators to destroy railroads and other lines of communication. Had aviators done more, under present crowded conditions of railroads, the catastrophe would have equaled that of Bulgaria and Palestine.

At recent royal council of war Ludendorf frankly (*) he could no longer count on 100 divisions as complete units.” The report is long. 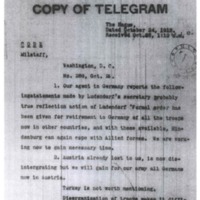