Translation Issued by the German Government

Translation Issued by the German Government

The German people approve of the armistice.

TRANSLATION
Issued by the German Government of its Communication
dated October 20, 1918,
Transmitted to the Secretary of State
by the Charge d’Affaires a.i. of Switzerland
on October 22, 1918.
******

In accepting the proposal for an evacuation of the occupied territories the German Government has started from the assumption that the procedure of this evacuation and of the conditions of the armistice should be left to the judgment of the military advisers and that the actual standard of power on both sides in the field has to form the basis for [of] arrangements safeguarding and guaranteeing this standard. The German Government suggests to the President to bring about an opportunity for fixing the details. It trusts that the President of the United States will approve of no demand which would [(will)] be irreconcilable with the honor of the German people and with opening a way to a peace of justice.

The German Government protests against the reproach of illegal and inhumane actions made against the German land and sea forces and thereby against the German people. For the covering of a retreat, destructions will always be necessary and are insofar permitted by international law. The German troops are under the strictest instructions to spare private property and to exercise care for the population to the best of their ability. Where transgressions occur in spite of these instructions the guilty are being punished.

The German Government further denies that the German Navy in sinking ships has ever purposely destroyed lifeboats with their passengers. The German Government proposes with regard to all these charges that the facts be cleared up by neutral commissions. In order to avoid anything that might hamper the work of peace, the German Government has caused orders to be despatched to all submarine commanders precluding the torpedoing of passenger ships, without, however, for technical reasons, being able to guarantee that these orders will reach every single submarine at sea before its return.

The question of the President, with whom he and the Governments associated against Germany are dealing, is therefore answered in a clear and unequivocal manner by the statement that the offer of peace and an armistice has come from a government which, free from [any] arbitrary and irresponsible influence, is supported by the approval of the overwhelming majority of the German people. 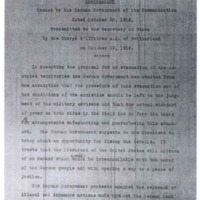