Paraphrase of Telegram from Mr. Balfour to Mr. Barclay

Paraphrase of Telegram from Mr. Balfour to Mr. Barclay

Germans do not seem to understand the Allied position.

The German reply to the President’s enquiries seems to assume that his answer to their first note contains the terms of a cessation of hostilities. It is evident from the President’s conversation with the French Ambassador that he never contemplated the grant of an armistice merely on the promise of Germany that she would withdraw her troops from the occupied territories. This we understand distinctly was no more than a condition essentially precedent to the communication of the German proposals by the President to the Associated Governments.

His Majesty’s Government very much doubt whether the position is thoroughly understood in Germany and whether the Germans realize that the Associated Powers will consent to a cessation of hostilities on no other terms but such as will render any resumption of hostilities by the Central Powers impossible in the opinion not only of the military but also of the naval authorities.

His Majesty’s Government accordingly regard it as of the very greatest importance that an immediate and public notification should be given to the German Government as to how the matter really stands. 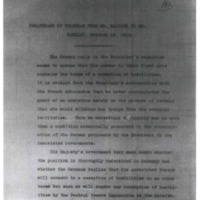