Coded cablegram on the main points of the armistice.

In compliance with resolution of three Prime Ministers communicated to you in my number 242 the below quoted document was drawn up this morning. It was not drawn up by the Military Representatives in their official capacity as connected with the Supreme War Council but by them as individuals associated with representatives of the four navies. It is not in the form of a Joint Note but is entitled “A Joint Opinion”. I do not know whether the Prime Ministers intend to communicate it to the American government or not. The Americans have taken no official part in it nor is the American government committed to it in any way by any action here. I have informed the Prime Ministers in writing that I cannot sign it in the absence of instructions from my Government. The document follows

“The Military Representatives and Naval Representatives meeting together on October 8th in accordance with the Resolution taken by the Conference of Ministers at their meeting held on 7th October, 1918, are of opinion that the first essential of an armistice is the disarmament of the enemy under the control of the Allies.

This principle having been established, the conditions specified by the Ministers at their Meeting held on 7th October, require from a military point of view to be supplemented as follows:-
Paragraph 1. Total and immediate evacuation by the enemy of France, Belgium, Luxemburg and Italy on the following conditions:-
Subparagraph (a) Immediate re-occupation by Allied troops of the territories so evacuated:
Subparagraph (b) Immediate repatriation of the civil population of these regions interned in enemy country:
Subparagraph (c) No “sabotage”, looting or fresh requisitions by enemy forces:
Subparagraph (d) Surrender of all arms and munitions of war and supplies between the present front and the left bank of the Rhine.
Paragraph 2. Germans to retire behind the Rhine into Germany.
Paragraph 3. Alsace-Lorraine to be evacuated by German troops without occupation by the Allies, with the exception stated in Clause 18 below.
It is understood that the Allies will not evacuate the territory in their occupation.
Paragraph 4. The same conditions apply to the territory included between the Italian frontier and a line passing through the Upper Adige, the Pusterthal as far as Tobloch, the Carnic Alps, the Tarvis and the meridian from Monte Nere, cutting the sea near the mouth of the Voloska (see Map of the Italian Military Geographical Institute 1 over 500,000).
Paragraph 5. Serbia, Montenegro and Albania to be evacuated by the enemy - under similar conditions to those stated in Clause 1.
Paragraph 6. Evacuation of the Caucasus by the troops of Central Powers.
Paragraph 7. Immediate steps to be taken for the evacuation of all territory belonging to Russia nad Roumania before the war.
Paragraph 8. Prisoners in enemy hands to be returned to Allied Armies without reciprocity in the shortest possible time. Prisoners taken from the Armies of the Central Powers to be employed for the reparation of the wilful damage done in the occupied areas by the enemy, and for the restoration of the areas.
Paragraph 9. All enemy surface ships (including Monitors, River craft, etc.), to withdraw to Naval Bases specified by the Allies and to remain there during the Armistice.
Paragraph 10. Submarine warfare to cease immediately on the signature of the Armistice. 60 submarines of types to be specified shall proceed at once to specified Allied Ports and stay there during the Armistice. Submarines operating in the North Sea and Atlantic shall not enter the Mediterranean.
Paragraph 11. Enemy Naval air forces to be concentrated in bases specified by the Allies and there remain during the Armistice.
Paragraph 12. Enemy to reveal position of all his mines outside territorial waters. Allies to have the right to sweep such mines at their own convenience.
Paragraph 13. Enemy to evacuate Belgian and Italian coast immediately, leaving behind all Naval war stores and equipment.
Paragraph 14. The Austro-Hungarian Navy to evacuate all ports in the Adriatic occupied by them outside national territory.
Paragraph 15. The Black Sea Ports to be immediately evacuated and warships and material seized in them by the enemy delivered to the allies.
Paragraph 16. No material destruction to be permitted before evacuation.
Paragraph 17. Present blockade conditions to remain unchanged. All Enemy merchant ships found at sea remain liable to capture.
Paragraph 18. In stating their terms as above, the Allied Governments cannot lose sight of the fact that the Government of Germany is in a position peculiar among the nations of Europe in that its word cannot be believed, and that it denies any obligation of honor. It is necessary, therefore, to demand from Germany material guarantees on a scale which will serve the purpose aimed at by a signed agreement in cases amongst ordinary civilized nations. In those circumstances, the Allied Governments demand that:-
Within 48 hours:-
1st. The fortresses of Metz, Thionville, Strassburg, Neu Breisach and the town and fortifications of Lille to be surrendered to the Allied Commanders-in-Chief.
2nd. The surrender of Heligeland to the Allied Naval Commander-in-Chief of the North Sea.
Paragraph 19. All the above measures, with the exception of those specially mentioned in paragraph 18, to be executed in the shortest possible time, which it would appear should not exceed three to four weeks.” 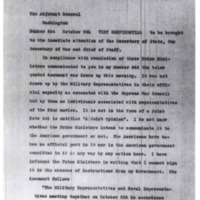