President Wilson replies to the proposal for peace.

Before making definite reply to the request of the Imperial German Government, and in order that that reply shall be as candid and straight-forward as the momentous interests involved require, the President of the United States deems it necessary to assure himself of the exact meaning of the note of the Imperial Chancellor, in order that there may be no misunderstanding. In saying that the German Government accepts the programme of peace set forth in the President’s address to the Congress of the United States on the eighth of January last and in subsequent addresses does that Government wish to be understood as accepting the terms there defined and as wishing to enter into discussions only for the purpose of making those terms more explicit and settling the practical details of their application? That is the President’s interpretation of the language employed by the Imperial Chancellor in the note, but he does not wish to put that interpretation upon the Chancellor’s words without the Chancellor’s explicit sanction.

If that is the Chancellor’s meaning, the Imperial German Government will realize how unlikely it would be that the Government of the United States or the European governments engaged against the Central Powers should consent to an immediate armistice and the discussion of final arrangements of peace before at least some of the essential conditions set forth in the programme referred to had been actually complied with as an earnest of the purpose of the German Government. The President refers particularly to the evacuation of Belgium, northern France, Russia, Roumania, Serbia, and Montenegro. The Imperial German Chancellor will remember that in his address to the Congress of the United States on the eighth of January the President used this language: with regard to the release of Belgium from German occupation and control: “No other single act will serve as this will serve to restore confidence among the nations in the laws which they have themselves set and determined for the government of their relations with one another”; and he now thinks it his duty to add that nothing would so clear the air for the discussion of peace as the withdrawal of German troops from the sovereign states whose soil they have occupied. Without this it would seem impossible to bring about the temper of agreement necessary for the final accommodations of peace.

He feels it to be his duty, also, to call the attention of the Imperial German Government with the utmost frankness to the acts with which its armies are accompanying their present withdrawal from the territory they have occupied in Flanders and in France. Every city and every village, if not destroyed, is being stripped not only of everything it contained but also of its very inhabitants, - a course of action which had hitherto been regarded as in direct violation of all the rules and practices of civilized warfare. Looking on, as they do, with horror at such acts of spoliation, inhumanity, and desolation, the nations engaged against Germany could hardly be expected to exact anything less than a peaceful withdrawal from their territory as a condition precedent to the discussion of a permanent and honorable settlement. 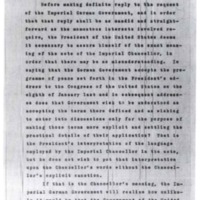