The Workman's Circle to Woodrow Wilson

The Workman's Circle to Woodrow Wilson

WHEREAS, the fundamental principal as stated in the Declaration of Independence, "that all men are created equal and endowed by their Creator with certain inaleinable rights, that among these are life, liberty and the pursuit of happiness", definately determines the status of all citizens of the United States, and

WHEREAS, the Constitution of the United States further provides that no State shall deprive any person of life, liberty or property without due process of the law, nor deny to any person within its jurisdiction the equal protection of the law also that in all criminal prosecution the accused shall enjoy the right of trial before an impartial jury, and

WHEREAS, the courts of Arkansas in imposing the death penalty upon eleven Negroes without adaquate testimony and trial have denied these men those rights guaranteed in the Constitution of the United States, have violated every law of justice and fair-play and have defamed the Constitution of this country, and

WHEREAS, we wish to demonstrate our emphatic resentment and indignation against such unprecedented, unjust and inhumane proceedure, against such brazen infringement of human rights, such wanton and unlawful shodding of human blood, therefore

BE IT RESOLVED, that the National Committee of the Workmen's Circle, a Fraternal Organization of 76,000 members scattered throughout the United States and Canada, call upon the President of the United States, the Congress of the United States and the Governor of Arkansas, to immediately stay the death sentence imposed upon these men; and to conduct a vigorous investigation of the conditions which led up to the Arkansas riots, the arrest and conviction of those men. 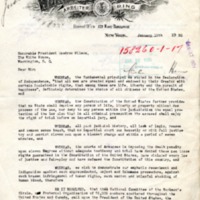