Mr. President:- I am taking the liberty of presenting this picture to you because I feel that the issues involved are as important as any question now pressing upon your busy attention.

America enjoys the evil distinction among all civilized nations of the earth of taking delight in murder and burning of human beings.

Nowhere else do men, women and children dance with ghoulish glee and fight for ghastly souvenirs of human flesh and mock the dying groans of the helpless victim which sicken the air, while the flickering flames of the funereal pile lighten the midnight sky with their lurid glare.

During the past thirty years nearly three thousand negroes have been lynched in various parts of the country.

Scores of these have been burned at the stake.

Even the bodies of women have been fed to the flames.

Thousands of localities in the majority of the States of the Union have experienced these outrages.

Our fair land of liberty is dotted over with these foul spots which cannot be washed out by all the waters of the Ocean.

It is not easy to calculate the number of persons who have been involved in these lynchings either as participants or as acquiescent on-lookers, all of whom were potential murderers.

So general and wide spread has become the practice that lynching may well be characterized as a national Institution, to the eternal disgrace of Democracy.

Mr. President, you are commander in Chief of the Army and Navy.

You express the voice of the American people in the great world conflict which involved practically the entire human race.

You are the accepted spokesman of world democracy.

If democracy cannot control lawlessness, then democracy must be pronounced a failure.

A chain is no stronger than its weakest link.

I know that it has been steadily maintained that the Federal Government has no authority over lynchings and local race conflicts.

This is not a political contention.

Striking indeed is the analogy between the spread of lawlessness to day and the extension of the institution of slavery two generations ago.

As the nation could not exist half slave and half free under Abraham Lincoln, so, also it cannot continue half law-abiding and half lawless under Woodrow Wilson.

The decision a few weeks ago of the United States Senate "to uphold jim crowism" and the manner in which votes were cast show that there is a judgment and a feeling against us in this nation which regesters at least four million and a half of votes.

We cannot destroy that judgment, feeling, nor sentiment by breaking up the political organization which rallies around it.

So it matters not which way we vote it is the same treatment.

You can scarcely disperse an orderly army in face of your heaviest fire; but if you could, how much would you gain by forcing the sentiment which created it out of the peaceful channel of the ballot-box into some other channel?

What would that other channel probably be?

Would lawlessness be lessened or enlarged by the operation of these injustices against us?

Mr. President, as a student of public question, I have carefully watched your attitude on the race problem.

You have preserved a lukewarm aloofness from the tangled issued of this problem.

In searching your writings one find little or no reference to this troubled phase of American life.

It seems that you regard it as a regrettable social malady to be treated with caution and calculated neglect.

You have kept the race problem in the back ground and I pray God that the very sight of this picture will make a lasting impression on you and may relief come when you shall do your whole duty to end these injustices to 10,000,000 helpless and loyal citizens of African descent in the United States.

Mr. President, why should these injustices be heaped upon us?

Is it because there is a fear we shall rise up against this Government?

NOTHING IS MORE ABSURD.

Like in John Brown's effort which was peculiar in that it was not a slave insurrection but an attemp by White men to get up a revolt among slaves, in which the slaves refused to participated.

In fact it was so absurd that the slaves, saw plainly enought it could not succeed.

Truly we have more sense to day than our Fathers had then, and rest assured we will use it with the same discretion regardless to conditions.

The remembrance of all these injustices makes us restless day and night.

The cries of their blood sounds in our ears.

Our only appeal is to you, and if your sense of duty forbids this then stand by your duty fearlessly and effectively.

We assure you that we shall neither be slandered from our duty by false accusations nor frightened from it by menaces of destruction, nor by injustices heaped upon us by our law-makers, nor by dungeons prepared by false leaders.

We have faith that right makes might, and in that faith we stand to the end and dare to do our duty as we understand it.

Nor can we justifiably (and cannot see how you do) withhold this on any ground save our conviction that these acts against us are wrong.

If this act of the "JIM CROWISM" by the United States Senate is right, all words, acts, laws, and constitutions against it are themselves wrong, and should be silenced and swept away.

If it is right, we cannot justly object to it.

If it is wrong, they cannot justly insist upon its extension, and should you speak and stop it as was done in the Mexican affair a few days ago it would have telling effect upon not only the down-trodden race of which I am a member but would purify the nation.

The helpless position of my people may yet bring America to a realization that righteousness exalteth a nation, but sin is a reproach to any people.

Theodore Hawkins
Minister of the gospel and an ex-Soldier. 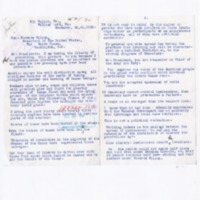