Writing in regard to 11 men being sentenced to death in riots in Phillip County, Arkansas.

Dear Sir The National association for the advancement of Colored people in the name of 12,000,000 negroes of the United States. Respectfully urge that you , our only Earthly Surpreme, to call on for justice in a case of this kind, of the Condition prevailling in Phillip County Ark. Eleven negroes has been Sentenced to Elecutrocute in Said County. Six of the above number was convicted in seven minutes, according to press report, by a jury. Fifty four negroes was Sentenced to terms from one to twenty one years in state prison, with out a white prisnor, although 20 or 25 negroes were killed in the disturbances. How many riots have you read of between negroes only, only in Phillip County Ark. according to the jury that Brought in the Verdict, the Riot was a negro clash, of their own, but this is not true, for the Negro race are peaceful and law abiding citizen, and will not molest any other Race, unless, for Self protection, which is allotted to every one from birth. Now we answered to our names when we are called by America, we Stands ready to protect the Red white and blue. We are the Breast plate of America in time of war, and least of all in time of peace. Right and justice never come our way, when needed, though we can hear of them, on the Other Side. Now if Ever we need our right and justice, it is now down in Phillip County Ark. where wholesale murder is being committed. I now appeal to you, that that we through you, request and immediate Federal investigation in to the case of Eleven men Sentenced to Electrocution. 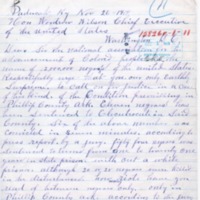