Writing to ask Congress to investigate the race riots in Helena, Arkansas.

To the President of the United States,
His Excellency, Pres. Woodrow Wilson,
Washington, D. C.

It is the mind of multitudes of good Americans that the legal department of the general government should not stand aside and see scores of American citizens legally murdered and enslaved in Helena, Ark., simply because those Americans happen to be also Negroes.

It is well known that colored people riot only in defending themselves against white people in this country. This, of course, is not necessarily due to any superior virtues in colored people. But people who are hopelessly in the minority, numerically, - and more than in a minority materially,- such people do not start riots, and we all know it.

Many Negroes were murdered in the Elaine and Helena, Arkansas, riots, and ONLY Negroes are being convicted, - by juries composed of all white people,- friends and relatives of the white rioters, if not the actual rioters themselves, being on these juries.

This is outrageous. The President of the United States must be interested in a matter like this.

If Arkansas be right in killing these Negroes for attempting to defend themselves, what earthly harm could come to Arkansas by haveing the Federal Government to investigate the matter and find out and justify the righteousness of Arkansas?

Congress should be requested to investigate this case. 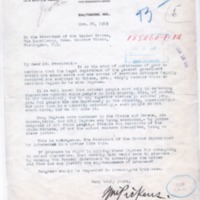