I am happy to say that the colored newspapers are making a great deal over The President's splendid statement concerning mob violence. You may recall that it was issued last week too late for publication in last week's papers, but the same has appeared in colored newspapers of this week's issue.

I am sending you herewith a bundle of such publications with editorial comments for the benefit of yourself and Mr. Creel.

Assuring you of my keen appreciation of the splendid cooperation you have given us in this important matter, I am, 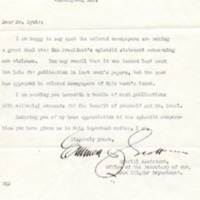