Resolution on Race Riots and Lynchings.

Resolution on Race Riots and Lynchings.

Journal of the Senate.

Proceedings of the US Senate regarding a proposed investigation of lynchings and race riots.

JOURNAL OF THE SENATE.

Mr. Curtis submitted the following resolution; which was referred to the Committee on the Judiciary:
Resolved, That the Committee on the Judiciary of the United States Senate be, and it is hereby, authorized and directed at as early a date as possible, by subcommittee, to investigate the race riots in the city of Washington, D. C., and other cities in the United States, and to investigate lynchings which have occurred in different parts of the United States, and to ascertain as far as possible the causes for such race riots and lynchings and report what remedy or remedies should be employed to prevent the recurrence of the same. Said subcommittee shall have power to have meetings in any part of the United States, to call and examine witnesses, to examine papers, and to take such action as may be necessary to secure the facts. 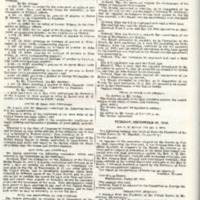