Asking the President for help with mob violence, segregation, and lynching.

In behalf of the twelve million Negroes of the United States, I respectfully beg to call your attention to the continued massacre of the colored people throughout the states.

The negro played his part and played it well in everything that makes this country what it is, and the part America took in the recent and great war, was to make the world safe for Democracy. The negro fought for this and in return, is now getting the democracy of MOB-VIOLENCE, SEGREGATION, JOHNCROWISM, and LYNCHING.

Mr. President, is this the democracy you intended for the negroes of America; are not your eyes opened to the fact that things are worst right here at your door in America, where the weak is constantly crushed and burnt at the stake by the strong, and where the government refuses to help, than it ever was in Europe? There is one continual excuse for all this: - "THE ATTACK OF COLORED MEN ON WHITE WOMEN". Let us all agree that any man who would so attack a woman is a beast, yet let his faith be determined by the law and not by a mob. "THE WHITE MAN'S ATTACK ON COLORED WOMEN" which is of a much higher percentage, is never taken into consideration. A negro seventy two years old has been lynched recently for defending two colored girls whom was attacked by two white men. (cutting enclosed) Under the name of heavens, why should the colored people be raped, massacred, and lynched by the hellish mobs of the white people to the content and satisfaction of your government?.

In many states, the most innocent man may be taken and lynched by a mob at any time. In many instances a whole family is taken and there home be devastated for the crime of someone may be unknown. This was the cause of the recent riot in the National Capital. Why should any group of people be massacred for the crime of an individual? / The lynching of a negro has become a pride amongst your people and is kept up as a big function when thousands in automobile would rush in from other states to enjoy the fun.

After the lynching of a negro in Mississippi, the mob sent a photograph of their victim as he hung riddled with bullets and burnt by the mob with the following words written on the back:- "This is the right we will give you, come down here and get a little of it for yourself."

This is all the negro gets, yet he remains the most loyal subject of his country. Many of our soldiers have been lynched in the South after returning for wearing their uniforms. Several schools and churches have been burnt or destroyed by the whites in appreciation of the black man's service for democracy.

Mr. President, I must suggest that the ruler of the nation or country, is in power to settle the wrongs of his country. It is the duty of the Senate of which you are the head to make laws governing the rights of your subjects. WE are looking up to you for proction; we cannot keep silent any more for we foresee much in a short distance if this practice is not checked.

You have been buisy over the Europian affairs which may be profitable, but I am afraid you are having a more important and profitable work to do right here in America and that is to set up democracy as afore promised to all.

I pray that God may open your eyes to see farther than you have already seen and may use you as an instrument to settle the wrongs of this great country.

Thanking you for attention;
I remain a member of the race: 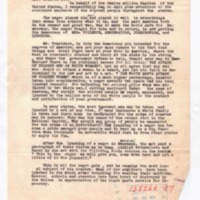