Statement of John R. Shillady, Secretary of the NAACP asking for a congressional investigation of lynching.

We believe the matter reproduced in the enclosed document warrants us in asking for a Congressional Investigation of Lynching.

Not only are mob murders advertised in the press of Mississippi, of Louisiana, and of other states, but state officers have confessed their inability to accord United States citizens the protection guaranteed under the Constitution.

In connection with the hanging and burning of John Hartfield at Ellisville, Mississippi, on June 26, Governor Bilbo said:

"The State has no troops and if the civil authorities at Ellisville are helpless, the State is equally so. Furthermore, excitement is at such a high pitch throughout Mississippi that any armed attempt to interfere with the mob would doubtless result in the death of hundreds of persons."

If American civilization is not to be made a mockery, the American people, through their representatives, must insist on observance of common decencies and of the law. 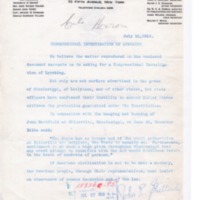