Requesting the President to intervene to put an end to mob violence.

I am writing you a letter asking for a favor that if granted will go down in History with other great achievements that have been accomplished by you.

Enclosed I am sending you a newspaper article by a local paper of a heinous crime committed by a lawless crowd at Winston-Salem. Now, Mr. President, I, like thousands of black and white people look upon you as one of the greatest men in the United States, and one of the greatest peace-makers of the world. We look with pride at the work done by our soldiers; black and white. We have read the papers, magazines and periodicals on the war, and with great horror we have read of the outrages done by the so-called Hun, and look again with pride on the mobilization of the soldiers and sailors. Mothers have shed tears for their sons; sisters for their brothers; and sweethearts for their friends.

Mr. President, we have read with great pride of the regulations laid down by you, for peace, that the people of the world might have Peace and Liberty once again.

Negro mothers have given their sons, you have recognized their value and worth, yet here in this country after we have declared that the people of the world shall enjoy Liberty, a handful of American barbarians insult the country and violate the laws of the land, by cruelly murdering the colored people of the United States.

Mr. President is it not possible after you have proven to the civilized world what could be accomplished abroad to have the same results at home; where the Colored people feel that protection is denied them under the Stars and Stripes. We hope that you will find a way to put a stop now and forever to this nefarious practice.

I have the honor to remain, 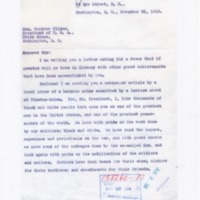