Press Release on the Office of Emmett J. Scott

Press Release on the Office of Emmett J. Scott

Press Release describing how the War Department bureau headed by Emmett J. Scott has grown with the addition of other office workers.

WASHINGTON, D. C., August 7. -When Mr. Emmett J. Scott, Secretary of Tuskegee Normal and Industrial Institute, was called to Washington last October to serve as Special Assistant to the Secretary of War, he immediately requested the Department of Commerce to release Mr. William H. Davis, who for many years had been performing stenographic and other technical work in that Department of the Government, and who for many years has been official stenographer of the National Negro Business League. Mr. Davis was accordingly released and has been serving as secretary and first assistant to Mr. Scott since the beginning of his work in Washington.

The office force was later enlarged by the addition of Mr. Charles A. Wilson, of Boston, Mass., a stenographic helper, and within the last few weeks by the further addition of Mr. Charles L. Webb, of Chicago, Ill., a stenographic helper, formerly status clerk in the United States General Land Office, Interior Department, and Mr. R. W. Thompson, the well-known correspondent, who has been transferred from the Treasury Department to serve as an assistant in handling the many intricate problems which come to the office of the Special Assistant, whose bureau looks after matters affecting the interest of colored soldiers and colored citizens generally during the period of the present war, and is acting in conjunction with the Committee on Public Information and other agencies of the Government in the important work of stimulating the continued loyalty of colored Americans.

The duties involving upon Mr. Scott have grown steadily in volume and gravity and it has been necessary to steadily increase his office force to keep pace with the overwhelming mass of correspondence that flows daily into the office and to properly care for the welfare of the hundreds of cases that constantly press for attention and touch every possible phase of the activities of the colored people of the nation. 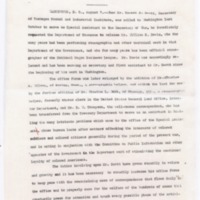 Committee on Public Information, Emmett Scott, US Department of War