Secretary of War sends message to House about the issuing of transporting prisoners of war.

The Secretary of War directs that the following cable be sent to Hon. Edward House, American Embassy, Paris, France.

The President has asked me to reply to your Number 140 addressed to the Secretary of State on the matter of transporting some 590,000 released French, British, American, Italian and Roumanian prisoners of war now at German ports.

The United States Government will immediately direct General Pershing to confer with Admiral Sims and provide the necessary transportation for whatever Americans may be included in the prisoners referred to. The problem of returning our own forces from France, with the transportation we have available under American control, practically precludes the assignment of any large number of American transports as suggested by Mr. Tardieu. Great Britain will no doubt be able to fully take care of all the British prisoners and it would seem, in view of the recent withdrawal of Italian vessels with a troops capacity of 12,000, and Russian transports with a capacity of 4,400 from American convoy, that Italy should be enabled to take care of the Italian and Roumanian prisoners of war. At present we have assigned to us French transports with an aggregate troop carrying capacity of 11,500 which are operating in our convoys and so long as these vessels remain in that service I feel that we should undertake to assist the French an equal extent, along the lines suggested by Mr. Tardieu, but only at such intervals as our vessels can be spared from the greater task of returning our forces from abroad.

I am informed that German vessels interned in German ports have an aggregate troop capacity of 72,000. Also that certain Holland-American liners with a capacity of approximately 11,000 might be made available for carrying troops. We appreciate that the necessity for the transportation of the released prisoners referred to by Mr. Tardieu is immediate, and if our Allies will agree to the assignment of a certain amount of the German passenger vessels above referred to the United States will undertake to lend its assistance in the transportation of the released prisoners of war with the understanding that the German vessels so assigned will first be used for the purpose of returning these prisoners and then be assigned for the transportation of American troops from France to the United States.

While I feel that our Government should lend every assistance possible to the Allies in relieving the situation referred to in your cablegram, the importance of relieving the task imposed upon General Pershing in caring for the large American force now abroad is such as to require that our first and greatest effort be made in the early return of such forces no longer needed abroad. 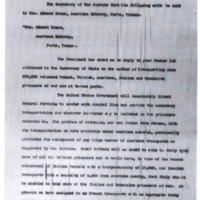