Petition for a African American representative in the Agricultural Department to serve black farmers.

Your letter of the 18th inst. in reference to editorial in The Daily Herald in advocacy of the appointment of a Negro representative in the Department of Agriculture has been received with the accompanying table of Negro employees in that Department and read with interest.

I beg to say that the editorial referred to was not written in a spirit of criticism or fault finding but entirely with the thought and purpose of conscientiously serving both the race to which I belong and the government. I was not unmindful of the generous recognition that my people have received at the hands of the present administration in many ways, especially in the appointments of Messrs. Emmett J. Scott and George E. Haynes to responsible positions and the commissioning of so many of our young men as officers in the army. This recognition has intensified the loyalty of my people and aroused in them a spirit of patriotism that, perhaps, nothing else could have excited.

They are beginning to feel that they are regarded as a part of the government and it was with the earnest desire that that feeling be strengthened and that they be encouraged and stimulated to greater endeavor in responding to the calls of the government that I urged further official recognition.

I did not overlook the extension work in the South; in fact, I have been very well acquainted with it for several years. Owing to conditions for which they are by no means entirely responsible Negro farmers stand in greater need of sufficient, competent, and efficient instruction than any other class of our farming population. They constitute a very large proportion of the farmers of the South and with a representative in the Agricultural Department whose special duty will be to look after their needs, so far as they come within the purview of the government, and to aid them to higher standards of efficiency and productiveness will render them and the government the highest possible service and the greatest benefit. 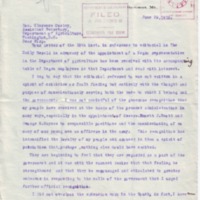