Establishing an African American division within the Committee on Public Information.

Subject: The Establishment of a Negro Division or Section of the Committee on Public Information.

Purpose. To see that the Negro gets public information, and to offset the German propaganda among the Negro as seen in print and the ideas expressed in conversation.

Solution: News for the Negro to be released weekly to the Negro press. Slides to the Negro moving picture theatres. Use of local Negro speakers in each Negro community. Posters in barber shops and places of amusement.

The organization for carrying out the above arrangement is practically complete.

A. U. Craig to be officially designated as Director, at a salary of one dollar ($1.00) per annum, with one stenographer.

[Note: beneath the typed memo are these handwritten words]: Morris
Who prepared this
GC

Mr Craig the colored man in the Food Administration came to me with the proposition. I told him to write a memorandum on the matter which I ____ place before you.
Lyons. 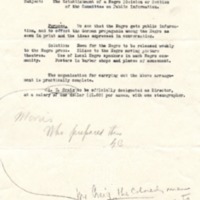