Describing the proposed work of the African American division of the Committee on Public Information.

Work of the Negro Division, Committee on Public Information.

Due consideration is to be given to the sociological and psychological condition of the Negro in all the work of this division, thus neutralizing or preventing the results of German propaganda.

The division is ready to assist any governmental department in preparing matter which will not be offensive to the Negro.

PRESS. News for the Negro to be released weekly in the form of clip-sheet, or one column of plate matter, to the 320 Negro papers. The clip-sheet is to contain short items or paragraphs from the different governmental departments on patriotism, the war, labor, food production and conservation, war finance, etc., the President's messages and proclamations simplified, as well as special "drives" to be featured. Cuts and cartoons to be supplied.

All Government news for the Negro to go out through this division.

All copy as cuts, cartoons, bulletins and memoranda for speakers, etc., must first go over the copy desk.

All Negro papers to be subscribed for and clipped.

MOVING PICTURE THEATRES. Slides with short slogans and Negro cartoons, etc., to be sent out weekly to the 200 moving picture theatres catering to the Negro.

Films of the Negro soldiers in camp, in the trenches, in actual war, as well as other patriotic films, to be routed with preliminary announcement slides and posters.

FOUR-MINUTE stereopticon illustrated lectures to be sent out.

POSTERS. Designed by Negro artists, showing Negro soldiers, sailors, etc., to be placed in barber shops, places of amusement, etc. A suitable poster to be placed in the vestibules of churches, lodge-rooms, and other conspicuous places. Designs to be secured by competition, the idea of the posters having first received the O. K. of the copy desk.

MESSENGERS, volunteer speakers, to deliver a message from Washington. Local Negro speakers to be appointed, who are to speak before meetings in churches, lodges and on special occasions. These messengers are to receive a one-sheet bulletin (specially prepared and selected) of the Committee on Public Information. These messengers are to deliver the President's statement and Mr. Creel's MESSAGE OF THE UNITED STATES GOVERNMENT TO THE AMERICAN PEOPLE, all in simplified form, as well as any special message from the various Government departments.

Prepared lectures illustrated by stereopticon slides or posters to be sent on request.

Organization of messengers to be under State chairmen (volunteers) who will make reports.

EDITORIAL STAFF. There is assisting me a number of notable Negro men and women (volunteers) of large vision, living in various parts of the United States, especially in the South and in large centers of Negro population, a few traveling supervisors of Negro work,--who suggest ideas which they think the Negro should have to help win the war. 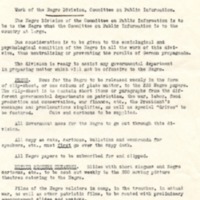