Anti-lynching pamphlet produced by the University Commission on Race Questions

This letter is not written to convince you that lynching is a crime, for you know it already. Its object is to urge you to show others whenever opportunity presents itself that lynching does more than rob its victims of their constitutional rights and of their lives. It simultaneously lynches law and justice and civilization, and outrages all the finer human sentiments and feelings.

The wrong that it does to the wretched victims is almost as nothing compared to the injury it does to the lynchers themselves, to the community, and to society at large.

Lynching is a contagious social disease, and as such is of deep concern to every American citizen and to every lover of civilization. It is especially of concern to you, and you can do much to abolish it. Vice and crime know that their best, though unconscious and unwilling allies, are luke-warmness and timidity on the part of educated, "good" citizens. Wrong is weaker than right, and must yield whenever right is persistent and determined.

It is, of course, no argument in favor of lynching, nor can we derive any legitimate satisfaction from the fact that it is not confined to any one section of our country and that the victims are not always black. One of the bad features of lynching is that it quickly becomes a habit, and, like all bad habits, deepens and widens rapidly. Formerly lynchings were mainly incited by rape and murder, but the habit has spread until now such outrages are committed for much less serious crimes.

The records of lynching for 1914, compiled by three different agencies, give the total number for the year at 52, 54, and 74, the authority for these figures being Tuskegee Institute, the Chicago Tribune, and the Crisis, respectively.

The conflicting reports can not be harmonized, but, to avoid any possibility of exaggeration, we may employ the most conservative of these for analysis.

The three women were lynched for the following reasons: One, 17 years old, for killing a man who, it was reported, had raped her; the second was accused of beating a child to death; the third was accused of helping her husband set fire to a barn. In the last case, both husband and wife were lynched in the presence of their 4-year-old child.

It should be especially noted that of the fifty-two persons lynched, only seven—two white and five colored—or 13 per cent, were charged with the crime against womanhood. This shows clearly how far and how quickly the habit has spread beyond the bounds set by those who first resorted to lynching as a remedy.

It is worthy of note that in at least four cases it later was discovered that the victims of the mob were innocent of the crime of which they were accused.

These are the terrible facts. Is there no remedy? Have we not sufficient legal intelligence and machinery to take care of every case of crime committed? Must we fall back on the methods of the jungle? Civilization rests on obedience to law, which means the substitution of reason and deliberation for impulse, instinct, and passion. It is easy and tempting to obey the latter, but to be governed by the former requires self-control, which comes from the interposition of thought between impulse and action. Herein lies the college man's opportunity to serve his fellows; to interpose deliberation between their impulses and action, and in that way to control both.

Society has a right to expect college men to help in moulding opinion and shaping conduct in matters of this sort. It is their privilege and duty to cooperate with others in leading crusades against crime and mob rule and for law and civilization. The college man belongs in the front rank of those fighting for moral and social progress. For this reason the University Commission makes its first appeal to you and urges you strongly to cooperate with the press, the pulpit, the bar, officers of the law, and all other agencies striving to eliminate this great evil, by speaking out boldly when speech is needed and letting your influence be felt against it in decided, unmistakable measure and manner. 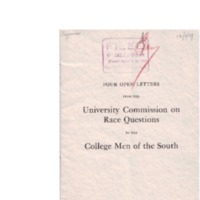