Letter to the Editor of St. Louis Labor discussing resolution proposed by the only African American man in attendance, Richard M. Bolden, which was not adopted.

"At last Saturday night's banquet 580 men and women ate and talked general preparedness." This is the substantial and happy way of winding up all conventions of a great people who have great problems on their minds. The occasion was the meeting here of "WE, the mayors and members of Mayors' Committee Upon National Defense of the Cities of the United States." We had with us at least thirty mayors of cities and a number of delegate mayors appointed by mayors and a few society people, all interested in the welfare of the nation. Conspicuous among the appointed delegates was one, a colored man from New York, Mr. Richard M. Bolden, who had received the nomination of State Senator in New York at a primary election. Mr. Bolden was appointed as a delegate by Mayor John Puroy Mitchell of New York City. He confined his activities to a mere "scrap of paper," which was handed into the committee room on resolutions, where it was suppressed, and resurrected by the New York mayor by request. Evidently Mr. Bolden had no idea that the colored people should not be heard from in the voluminous paper preparedness being created by the political patriots in our land. In order that one may judge of the inoffensive resolution offered by Mr. Bolden a copy thereof follows:

Whereas, the Colored people of the United States of America, Industrious, patient, loyal and patriotic Americans heretofore, and are now willing to offer their bodies, mind and spirit to serve our Glorious Country in any capacity that their training will place them when the call is made; be it

"Resolved, That they shall be efficiently trained to defend our country North, South, East and West, in the Home of the free and the land of the brave."

This innocent, meaningless resolution went to the Committee on Resolutions and was there properly cremated. For the only colored delegate at the Convention for Preparedness to presume that he was attending the meeting other than an onlooker was of itself more than the mayors could stand. That "they shall be efficiently trained" would have placed the Negro in the same regiment with the whites, and this was more than the patriotism of the mayors would tolerate. To have their proper sphere in the great nightmare of preparedness it was necessary to recognize the colored man as a free man, which was incompatible with the ideas of the Southern mayors in attendance at the convention.

In order to make the colored man free for military preparedness it becomes necessary that he should be free from segregation, free to enjoy the rights accorded to the white man; otherwise he is only a vassal tied to the land. The patriotism of a vassal is a debatable problem that allows of no argument. The resolution was squelched; someone saw the import of the resolution after analysis and it was dropped like a hot potato. Segregation had made a vassal of the black man. A country divided against itself cannot endure and before a nation can defend itself against an outside foe it must be a unit on the inside.

The hyphenated problem and the segregated negro problem is a plague in this country that must first be dealt with and stamped out before the military preparedness can be carried much farther.

Before adjourning the convention passed the usual resolutions for which conventions are called when not busy banqueting. The resolution contained:

Whereas, The republic is for the common defense;
Whereas, The nation is without adequate defense;
Whereas, National defense requires navy, coast defense, mobile army and mobilization of physical resources;
Whereas, General Board of Navy is shy on weight for diplomatic use or war;
Whereas Navy should be increased until we are it;
Whereas, General Staff of army submitted plan for army increase; now, be it
Resolved, that WE (who do not represent the people in Congress, but the political pie counters of municipalities) have "Resolved" at least five times, with one "resolved" divided into four sections, and are going to tell the Congressmen and Senators all about it, and then WE adopted an amended resolution containing "Resolved" six times, and every one was happy when the motion to adjourn arrived.

Mayor Kiel was a good presiding officer. He gave everyone an opportunity to talk, talk and talk and to eat, eat and eat. 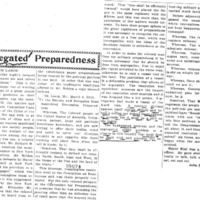