Chairman of the Shipping Board passes along a letter from Charles Day.

Although I am reluctant to ask you to read such a long message, the enclosed cable from Charles Day, who is temporarily representing the United States Shipping Board in France, contains such encouraging news that I thought it would interest you. It is apparent that our port facilities abroad are better than supposed and that a possible port capacity can be reached in excess of the maximum we have assumed. Mr. Day’s comments on the continuing vital necessity for ships, although imposing a maximum of sacrifices at home, seem significant.


The President,
The White House. 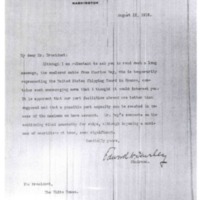