Regarding segregation of African American clerks at the Bureau of Foreign and Domestic Commerce.

In accordance with your request I beg to state that at the time the Bureau of Foreign and Domestic Commerce was transferred to its present quarters in the Commerce Building there was possibly, though I know not for what reason, some segregation of the colored employees of this Bureau. The segregation, if it may be so called, was only in the Division of Statistics and the desks of the four colored employees of that Division were all situated in one corner of the room. The addition to the Commerce Building was completed and we moved into it about the middle of June 1914. At that time an effort was made to correlate the work of the various clerks in the Statistical Division, that is, to locate clerks employed on the same class of statistics, close to each other. In this rearrangement the segregation was broken up and there has been no change in the desks or locations of such employees since that time.

There are nine colored employees in the Bureau, four in the Division of Statistics, one in the Distribution Section, two attached to the Correspondence Section, and two messengers one to the Chief of the Bureau and one in the Chief Clerks office. Their names are as follows:

[note: A handwritten note appears above the body of typewritten letter: "Re. Segregation of Colored clerks"] 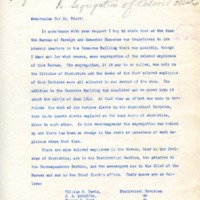 Bureau of Domestic and Foreign Commerce, Department of Commerce, segregation