Have just received information of unfavorable development in Lake Baikal front where small body from the Western area are in danger of being overwhelmed by concentration of enemy forces of combined war prisoners and Red Guards which are now moving away from Semyonoff front, where they have been, to combine with already liberated force at Chita and vicinity.

Czech General at Vladivostok feels it necessary to move almost immediately via China Eastwards towards Chita; leaves only 1500 men in Eastern Siberia. This is a great reduction on force which has hitherto been proposed to hold enemy from Habarovsk direction (north) and makes situation much more serious than it has been considered. Force which may move on Vladivostok after withdrawing this force may reach ten thousand.

If it is true that Allied forces other than 800 British are to be sent here soon, it is urgent that they arrive earliest possible date.

Recent triumph of the local Bolsheviki in the election is likely to cause internal unrest, especially when it becomes known that Czechs are moving west.

Request information whether Allied troops are to be sent here and when. 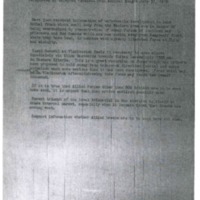