Chairman of the Committee of Public Information passes along a cable sent to Italy by a correspondent.

I share in the view most of the foreign representatives took; I am enclosing a cable sent to Italy the day after election by Captain Bevione, head of the Italian Information Bureau:

“The elections resulted as follows: Senate, Republicans, 49 places out of 96, House of Representatives, Republicans 239 places out of 435. The political struggle was very hard fought but was developed on internal questions rather than on the greater questions of war and peace.

Wilson’s assured position in Europe cannot be considered injured by the result of the elections because his attitude during the war and regarding peace did not form an essential platform of the voting, in the second place because the President’s thought remains firmly turned toward the democratization of the world on the foundation of self-determination of nations and the league of nations, Germany included.” BEVIONE. 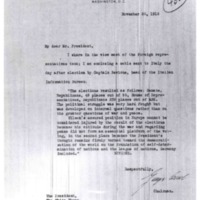