The Report of the National Campaign Manager

The Report of the National Campaign Manager

Report on the effort to gain support in the US for the League of Nations.

THE REPORT
of
NATIONAL CAMPAIGN MANAGER
(With Exhibits)

To the Executive Committee:

Fifteen State Legislatures have heretofore been reported as having adopted joint or concurrent resolutions favoring a League of Nations. The recent action of the Wisconsin Legislature adds another. Legislative sessions in substantially all the States will convene in January, 1919. We are endeavoring to assemble the personnel of each Legislature that we may write each individual member in advance.

After our Philadelphia Convention, we prepared and suggested a plank for adoption by State and Congressional Conventions of the political parties, sending copies of it to each State and County Chairman and Committeeman and to each National Committeeman of the Democratic and Republican parties. The individual members of the League’s Executive Committee and the entire personnel of the State organizations were invited to assist in securing favorable action by the political conventions. The press of the country commented editorially and ran lengthy news stories in their news columns, and wide circulation of the suggested plank was obtained. We have found it almost impossible to get any general report from County or Congressional Conventions and very difficult to get information even about State platforms. So far we learn that nine State Republican and five State Democratic Convention platforms contain favorable planks; that five Republican and eight Democratic State Conventions had been held before our appeal reached them, and that in twelve States the Republican and in ten the Democratic party held no conventions; that seven Republican and six Democratic conventions failed to mention, and from fifteen Republican and nineteen Democratic State Conventions we have been unable to get reports, despite repeated inquiry through several different channels.

Five State Branches of the League have recently held regularly delegated State “Win the War for Permanent Peace” Conventions, and the officers of roundly twenty-five other State Branches are definitely committed to holding Conventions, provided we can send them acceptable speakers of national reputation.

Something like twenty-two County Conventions are now in process of organization, and forty-nine are proposed for North Dakota, preliminary to holding the State Convention.

We are assisting the Extension Department in securing speakers, in the distribution of literature and in the securing of resolutions from organized bodies; The Financial Department in membership plans and campaign; the Committee on Information in providing and securing matters of interest for publicity purposes.

With our very able Assistant National Campaign Manager almost constantly in the field, we are establishing many important contacts and doing what we can to knit the political forces in each State together in our auxiliary organizations to prevent, so far as we may, the joining of any partisan political issue on the League of Nations proposal.

We have recommended, and are trying to effect, a program to hold a “League of Nations Convention” in each of the forty-eight States and in each of the 2,891 political sub-divisions-- Counties, Parishes, etc., throughout the entire United States. 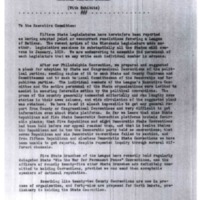