Colonel House to Secretary of State

Colonel House to Secretary of State

Number 52, November 6, 4pm.
For Polk from Auchincloss. Warburton, Military Attache in Paris has been of a great deal of assistance to us and has taken no end of trouble in our behalf. We have given him certain information respecting negotiations of the past week upon receiving assurances from him that he would not report the name to the Military Intelligence in Washington. Apparently he misunderstood a remark of Grew’s who said, in reply to Warburton’s inquiry, that a great deal of foreign intelligence received by the State Department was sent automatically to the Military Intelligence. Churchill has been cabling Warburton insisting on report of last week’s proceedings of Supreme War Council. Please explain to Churchill that Colonel House prefers that all information of this character shall be obtained from the President to whom he is reporting fully and that he is unwilling to give Warburton information concerning these negotiations to be reported to the military intelligence in Washington. I asked you to make this explanation in justice to Warburton.

Will you not kindly give your personal attention to this?

[note: the last short note, beginning “Dear Baker,” is handwritten at the bottom of a typed message.] 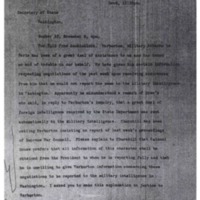