To the Adjutant General.

RUSH Number 1869 November 4th.
Personal and Confidential for the Secretary of War.
Reference your cable November 2d, President’s comments as set forth in former cablegram had been received and it was because of his wishes as expressed in first paragraph therein that I thought it desirable from a military standpoint to lay before him fully my views as to advisability of granting armistice. On account of my illness with grippe for some days was unable to discuss the matter with Mr. House, and also unable to present views to War Council, so I gave the letter personally to Mr. House whom I saw for only a moment and letter was presented by him to the War Council. I left immediately for the front where I remained two days when I was called back to Paris together with Allied Commanders in Chief and met with War Council on Saturday. While there had full opportunity to go over the whole situation with Mr. House and we are working together in perfect harmony. Shall give him all assistance possible in his difficult task. For your personal information, War Council decided withhold reply to Germany until answer from Austria shall be received. Armistice conditions have been discussed by Supreme War Council and views of the military obtained. As Mr. House reports direct to President on this whole question further report by me to War Department would now seem unnecessary. 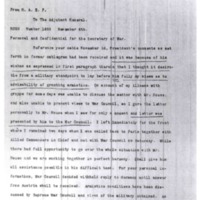