Pleasant A. Stovall to Robert Lansing

Pleasant A. Stovall to Robert Lansing

Letter about Bolshevik threat to Europe.

Important. 5487. October 30, 12 a. m.
Confidential. George D. Herron reports interview with David Soskic, former secretary of Keransky in Russia, presented to Herron and vouched for by chief of British Intelligence Service in Switzerland. Soskic believes there is an imminent and serious Bolsheviki menace in Europe in interest of Germany. Agents have slipped into France and Italy supplied with funds amounting to one hundred and fifty million marks. Madam Balibanoff, a Russian, has gone to Italy with ten million marks to spread propaganda.

According to Soskic, Germany hopes for continuance peace conversations and out break of Bolshevikism in Italy, France and Austria, whereupon Germany will become savior of civilization and rally all Conservative forces of Europe. Herron states: “If Germany, by subsidizing now every subversive movement or, can, during the winter, forment a common disorder throughout Europe, such as she produced in Roumania, even though it be of a lesser degree , she can still hope to rally her forces under the banner of the defender of European society and civilization, the society and civilization which she will have underminded in order to save herself by defending it. Herron suggests giving this matter publicity in order counteract spread of propaganda. 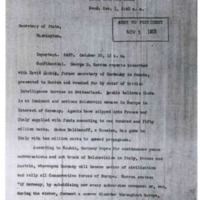