Austria agrees to fourteen points, additional points, and the formation of Yugoslavia.

[Transcription made by Miss Donnally, under the direction of R. S. Baker]

[To the Austrian Government

The President understands the Austrian Government to accept as the terms of peace not only the fourteen points enumerated in the address of the President to the Congress of the United States on the 8th of June last and the principles of settlement set forth in subsequent addresses, but also to consent to deal with the now definitely constituted representatives of the Czechoslovakian and Jugoslavian peoples as with regularly constituted political authorities and for the purposes of making such arrangements of independence as will be satisfactory to those peoples.

Understanding the communication of the Austrian Government of the…..of October in this sense, the President will submit to the consideration of the Governments with which the Government of the United States is associated in war the question of peace and the terms of armistice which would afford the United States guarantees for the successful negotiation of peace upon the basis of such an understanding.] 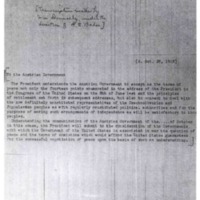