Morris to Secretary of State

Morris to Secretary of State

My visit to Harbin has enabled me to confirm the following facts:

First. During the last six weeks 40,000 Japanese troops have passed through Northern Manchuria. These figures are taken from careful examination compiled separate from the railway service corps.

Second. Of these troops 6,000 as estimated by our army officers, are located in barracks at Harbin. All the available barracks, about 19 in number, have been taken over by the Japanese and although several of the large barracks are merely guarded and not occupied, it has thus far been impossible to obtain any quarters for the American troops which General Graves had planned to send. Friendly efforts of Russian and Chinese officials to obtain from the Japanese military authorities one of unoccupied barracks for American use have been unsuccessful.

Third. The stations and yards of the Chinese Eastern at Harbin are virtually under the control of the Japanese singly, who supervise the movement of all freight and the distribution of all cars.

Fourth. The Russian railway officials are permitted to remain at the stations but are compelled, by show of force, to submit to the directing of the Japanese garrison commanders.

Sixth. The total number of Japanese troops thus stationed on the main line, including Harbin, is approximately 12,000. In addition, I am informed that 20,000 are preparing to winter at Chita, commanding the junction of the Amur Railway, which is being carefully policed with Japanese soldiers. Japanese garrisons are also being placed at strategic points on the railway between Harbin and Vladivostok.

Seventh. During the last month, and while the Japanese troops have been occupying the railway, practically no freight except that intended for Japanese use have been allowed to move. All Japanese supply train are carefully sealed and guarded by soldiers. No railway or other official is permitted to approach or examine them. This has naturally given rise to rumors that large quantities of Japanese goods are being shipped into Manchuria and Siberia for commercial purposes and free from customs inspection.

Eighth. Within the last few days Colonel Emerson has confirmed the following additional facts: A. The Japanese flag is being raised on the various stations, or on the adjoining railway property occupied; B. In several authenticated cases Russian railway employees have been evicted from the living quarters provided for them by the railway authorities, and Japanese soldiers have taken possession; C. Russian stationmasters and trainmen have been threatened unless they promptly recognized the authority of Japanese officers. As a result Colonel Emerson is informed that many of the Russian engineers are leaving and that there are Japanese railway men assembled at Changchuen prepared immediately to replace them.

Ninth. General Horvath has frankly admitted to Stevens that control of the operation of the Chinese Eastern has passed entirely out of his hands. The remnant of the Russian military guard is of course ignored. The Chinese soldiers are holding their ground at the various stations but are helpless before the Japanese garrison commanders and are being forced gradually to surrender their quarters.

Tenth. With the exception of a few American troops operating under Japanese senior command north of Vladivostok and seventy-five soldiers sent by General Graves to Harbin and quartered in the Red Cross offices there, the American forces are still in barracks at Vladivostok. I do not think they could at present move to any point along the entire length of the Chinese Eastern as all the available shelters have been appropriated by the Japanese authorities.

Eleventh. Colonel Emerson and his men are continuing their efforts to retain the position of instructors to the Russian personnel of the Chinese Eastern but Japanese interference is daily narrowing their field. They have been definitely excluded from assisting in any way the operation of Japanese troop or supply trains and are hampered in aiding the despatch of the few remaining passenger trains which the Russians are still permitted to run. These men of experience and capacity have met the situation with patience and judgment.

I submit this statement for the consideration of the Department as it forms the actual background of the present negotiations. Unless some clear understanding can be reached with the Japanese Government in regard to the meaning and purpose of this military occupation of the Chinese Eastern Railway, any assent to our proposed plan of operation would, I fear, be artificial and dangerous, and Mr. Stevens’s position would rapidly become untenable. 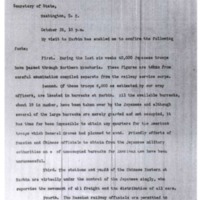