You have no idea - nor can have - of the tremendous popularity of President Wilson in Spain. I have given out two lots of photographs, one of 1500 another of 1000, and in addition 250 large photographs which I had made from a secondary negative, and I am being swamped with requests for more from every section of the country.

Today a delegation from the village of Tomelloso, in the province of Cindad Real - in La Mancha of Don Quixote fame, arrived in Madrid to petition the government to be allowed to change the name of the village center from Plaza de la Constitution, to Plaza de Wilson.

The city of Malaga has changed the name of their main avenue - “Alemeda Principal”, to “Alemeda Wilson” and the city council has elected President Wilson, “citizen of Malaga”. You of course know that the city of Barcelona has already done the president a similar honor.

You will probably remember that when I was in Washington I told you that I thought one of the most important things we could do in Spain was to “press-agent”, President Wilson. Well, I have done so with a vengeance, and there is hardly a paper in Spain that has not run several articles about him with his portrait. A Jesuit priest recently went into a house in Madrid and chided the head of the family for having a picture of Wilson on his wall along side of a picture of the Pope. The Spanish gentleman’s retort was - “The Pope is the father of our church, but President Wilson is the father of the whole world”. And he really expressed the opinion of a very large majority of the intelligent men of Spain.

Finally - the pamphlet which I issued week before last containing President Wilson’s speech of Sept. 28, is being used in the Madrid public schools for the reading classes, and at the request of many of the teachers, I have sent portraits of the President to the various schools.

Our work in Spain has been a splendid success. I say this not to blow my own horn, but because I know the military attache’s office is sending weekly reports to Washington criticizing, unfavorably, the work of this office because we are not more aggressively anti-German. But I have been here nearly a year and I was well advised when I came. I have followed the direction of the letters President Wilson and Mr. Creel faithfully and I realize better than anyone else that they had exactly the right idea of how to do our work in Spain. Two of the leading men in the American Embassy forces are to return to the States in a few weeks, Chadbourne of the War Trade Board, who has been here the same length of time that I have, and Capt. Crosby, the Naval Attache. I trust you will have an opportunity to talk to them and I am quite willing to have your judgement on my work formed by their unbiased opinion of it. 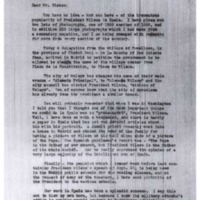