General Bliss to Secretary of War

General Bliss to Secretary of War

General Bliss's views on what should be done with Germany.

In further reference to my number 1 T H B dated October 22nd I make following preliminary report of views.

Your telegram dated October 21st through Department of State calls for summary of official expressions, civil and military. Just now it is difficult to obtain official expressions because all officials hesitate to speak definitely of the aims for publication. I doubt if anything definite will be obtained until Government of the United States makes request for conference with all its associates with view to reach definite detailed agreement. I think European allies want this and are waiting for it.

The nearest approach to official opinion by the three prime ministers is contained in my number 242 dated October 7th. I am informed that this agreement was the result of mutual concessions.

The nearest approach to an official expression of military opinion is contained in my number 244 dated October 8th. This also was the result of mutual concessions but is far more drastic than the views of the three prime ministers referred to above. I am informed that Marshal Foch also submitted confidentially his recommendations at the same time to the three prime ministers and that they were more drastic than these of the three military representatives contained in my number 244. I am informed that he demanded that the Germans should retire at the rate of 30 kilometers per day until they reached a line 50 kilometers east of the Rhine and that they should surrender to the allies four bridge heads on the Rhine to be occupied by the Allies. You will observe that the views expressed by the military men as to conditions of so called armistice are quite as much political as they are military and probably foreshadow peace demands that will be insisted on by the military parties of the Allies. These demands show a tendency to increase with each day’s success in present military operations.

I think that foregoing facts show that much trouble is to be apprehended if military men alone are to determine conditions of armistice. This is because the so called armistice is not an armistice but a demand for a complete surrender accompanied by a plain indication of the political demands that will be made after the surrender. If the purely military conditions for the so called armistice were the absolutely laying down of arms by Germany the military men will have perfect guaranty(ies) against the possibility of a resumption of hostilities. It seems to me that that is all the military men should be permitted to say. It would be a complete surrender on the part of Germany but would leave them with the hope that some mercy would be shown them. I believe that to be the only way in which we can get a complete surrender. And if we get such complete surrender what more need we ask? The Government of the United States and its associates in the war can then determine calmly and without passion what it is right and just to do now and what will conduce to the future peace of the world. The present attitude of Germany as indicated in her last note to the Government of the United States is probably sincere because, if for no other reason, she believes the United States and its associated are standing together. Notwithstanding this Germany hopes that possibly through the influence of the United States an unnecessary humiliating peace will not be forced on her even though she now surrenders her arms and makes it impossible for her to resume hostilities. But if under the guise of conditions for an armistice Germany thinks that the European Allies intend to force upon her an unnecessary humiliating peace (which means taking from her everything that can be taken under any conditions) it may mean at least another year of war with certain possible chances involved. If we can now secure the surrender of Germany under conditions that will make it impossible for her to resume hostilities and thus enable the Allies to determine in cool blood what is right and just and wise, why should this not be done? It probably can not be done by imposing in advance unnecessary humiliating conditions. If this be not done the German people may accept complete surrender the influence of the United States to prevent unnecessary humiliation in subsequent terms to be imposed on them.

If such a peace as the United States and her associates have a right to demand can possibly be obtained without the necessity of beating Germany into the ground it seems most probable that she will agree to some form of permanent disarmament. There will then be hope that other nations with disarm also. But if the peace comes with Germany beaten into the ground I think that it means Europe armed indefinitely to try to maintain such a peace. If a league of armed nations is then formed, the United States must be armed like the rest. It is one of our war aims to prevent this. To sum up:

First, attempt to secure complete military disarmament of Germany so that there can be no hope of her resuming hostilities. I think there is hope that this can be done if the great powers associated against Germany make this their united demand without the imposition of any other terms for cessation of hostilities.

Second, say to Germany that there will be no relaxation in our war aims but that they will be subject to full and reasonable discussion with our associates in the war and that Germany herself will be heard in these matters but that she must submit to whatever the United States and her associates finally agree upon. Some of these things must necessarily be the subject of discussion.

Copy for Chief of Staff. 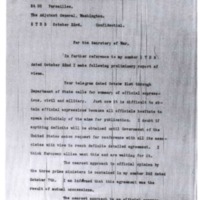