Portion of a speech by the German Chancellor in the Reichstag.

“The bill further proposes a change of the law concerning the substitutes of the Chancellor. Until now only the chiefs of the highest imperial offices could act as substitutes of the Chancellor, in the future members of the Reichstag shall participate in the conduct of the policy of the empire and shall be able to answer in the name of the Chancellor without being obliged to take charge of a special department. Hereby a new road has been opened which leads to the responsible conduct of the business of the empire: the road of parliamentarism. We feel sure that it shall prove beneficial by setting free valuable popular forces which until now lay fallow not only for the government but also indirectly for the parliament, especially the rising of born leaders from other free professions will remain open. Closely connected with this bill are the preparations for the complete legal construction of the political responsibility of the Chancellor which ought to be guaranteed by the establishment of a court of impeachment. To be sure it could be necessary in order to enforce the responsibility of the Chancellor since no Chancellor nor State Secretary can remain in office if he has lost the confidence of the majority of this house. But I nevertheless consider it useful if the political reform of the German system of government ins enforced and guaranteed by such an institution of public right and that therefore hope to be able to place soon before the Reichstag the result of this preliminary work.

A natural consequence of the new system of government in the empire has been a new method of government also in Alsace Lorraine. The regency of Alsace Lorraine has been taken over by an Alsatian and another Alsatian has become his Secretary of State. Other leading members of the second chamber will enter into the government of that country. I presume that the new regent together with the leaders of the parties is going to set up a programme and put it before the public.

Gentleman, the second bill, providing for an alteration of Section Eleven of the Constitution of the empire, contains in a binding form the fundamental idea of the new system of government. It means that the Reichstag as the competent representative of the nation has a full right to cooperate in the decision of the vital questions of the whole nation, namely the questions of peace and war. That is a guarantee for the further peaceful development of the empire and its relations to other powers this guarantee could be increased if treaties of alliance were also subjected to this new regulation. The Imperial Government will gladly assist in bringing about such an increase of popular rights, in case the league of nations should assume practical shape. As long as there exists no legal system binding the whole world in this respect, Germany would be put at a disadvantage by such a one sided constitutional check; but when the league of nations will have done away with all secret and separate alliances and confidential agreements, it will be possible to develop article eleven also in this direction.

Gentlemen! The state of war has in all countries entailed vexatious limitations of civil liberty. Peace will bring us its complete restitution. As yet the increased executive powers indispensable in time of war cannot be dispensed with but they are henceforth to be exercised in accordance only with the Chancellor of the empire who is responsible for their exercise to the Reichstag. By this means unequitable severities will be avoided.

The proclamations of the emperor announced by me on October fifth have since been issued and comprise not only measures regarding the censorship, the right of public meeting and the limitations of personal liberty, but extend to the whole activity of the executive even with respect to economic and social policy. In case the local military commanders cannot come to an agreement with the administrative authorities in these questions they are without delay to be brought to the decision of the supreme military commander, and he again is unable to issue any decisions or orders not approved by me or my substitute. 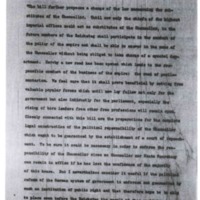