Portion of a speech by the German Chancellor in the Reichstag.

-Second Official Chancellor’s speech. The German Chancellor pronounced in the meeting of the Reichstag on Tuesday, October twenty-second, the following speech:

Gentleman: Since I have spoken to you for the first time, further steps have been taken on both sides in pursuance of the action for peace which the Government had initiated on coming into office. First came the counter question of President Wilson. Our unequivocally affirmative answer has led to a renewed inquiry from the President: our answer to this was published yesterday.

Gentleman: The German people are waiting to hear what are the prospects for peace according to the opinion of the Government.

You will understand, that I can only discuss this question with the greatest reserve. I know that the parties are equally desirous of carrying on the debate with all that restraint which is demanded by the gravity of the hour.

It is the German people that President Wilson addresses. This fact adds weight to the utterances of the representatives of all parties.

I will therefore make no more than the following comment about the international situation.

The first answer which the President made to the peace offer of the German Government has brought to a climax in all countries the conflict of opinion centering around the question: peace of right or peace of force? This is the controversy publicly fought out in each of the allied countries as in similar circumstances it would have been inevitable in our own country.

On the one hand the voices of these rise louder than ever who imagine that the moment is near when they will be able to satisfy all the accumulated passions of hatred and revenge of the soil of our country.

On the other hand the sincere supporters of a League of nations are perfectly alive to the fact that the axiom of the creed is standing today its crucial test.

This is the axiom. Before any one single power or any group of powers undertakes to obtain what it claims as its right by the coercive use of force against another nation a genuine and conclusive effort ought to be made to reach an agreement by consent and thereby to preserve peace or to obtain as in the present international situation.

President Wilson’s last note has not made it clear to the German people what is going to be the outcome of the great public controversy. Perhaps the coming answer from the President may bring final certainty.

Until then, Gentlemen, we must in all our thoughts and in all our actions get ready for both alternatives.

This is the first: The Governments of our enemies want more war and no other choice is left to us but to defend ourselves with the strength of a people driven to fight a [illegible].

If this necessity arises have no doubt, that the German Government may appeal for the defence of the nation in the name of the German people, just as it was entitled to speak in the name of the people when it took action for peace. No who honestly stands on the basis of a peace of right has at the same time taken upon himself the duty not to bow to a peace of force without resistance.

A Government who is not alive to this feeling would have to face the contempt of the fighting and working German nation; it would be swept away by a wave of public indignation.

But gentlemen! We must at the same time face the second alternative with all its consequences. The German people must not be led blindfold to the conference. The nation has a right to put the question today: were peace to come on the basis of Wilson’s conditions what does that mean for Germany’s national life and future? To judge by the echo of public opinion it was not till after our answer to the President’s first question that the German people has become conscious of the issue. Now it wants to see clear.

Yes, Gentlemen, it has been for us a decision of tremendous consequences. The strength of our position shall no more be made dependent on what we ourselves consider to be right but on what comes to be recognised as right as the result of free discussion with our opponents. This demands a harsh self-denial for a proud nation accustomed to victory for the question what is right does not stop short of our frontiers, which we would never consent to open to force. The points which we have accepted as binding involve problems inside our own territory. 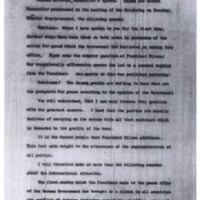