Senator Hollis writes to President Wilson about what he has experienced in France.

Your note of October 14th was hailed with joy by the press and the people of England and France. If there were any moderate voices they were lost in the shouts of praise. You added greatly to the prestige you already had in Europe. On every side you were acclaimed as the greatest man in the world. If it becomes necessary later to defend “those to whom we do not wish to be unjust”, you will have only to point to your firmness at this juncture to prove that you may be implicitly trusted not to be fooled.

Since the receipt of this note by Germany, there has been no wholesale destruction of property in French and Belgian towns. I enclose clippings from the Paris Edition of the New York Herald showing that Lille was left intact, and that her shops had enough goods to remain open: that the people showed no signs of great privation: that Iseghem “escaped with hardly a scratch”: that the “enemy shows almost almost ostentatious care in avoiding the destruction of buildings within the limits of Courtrai”: that “the city (Lille) appears rather normal…..the shops seem to be provisioned reasonably”: that on officer said “we are playing up to President Wilson.”

I spent last Thursday and Friday in the devastated region, visiting Montdidier, Roye, Ham, St. Quentin, Noyon and Tergnier. Practically every building was destroyed. Wherever there was a building standing….food, and excellent hiding places from airplanes. I doubt whether the destruction was more thorough than the destruction inflicted by Sherman on his march to the sea.

But since Germany has failed, she should be made to pay indemnity. My point is that she has kept pretty nearly within the rules of war in destroying property, and she is now being very punctilious, hoping for better terms of peace. The French newspapers do not give any news of such improvement. It seems to me that the deportation of citizens and the drowning and killing of ship passengers….a very different matter.

The German reply of October 20th is out. I enclose commentaries by the press. They are not so sure that this reply should be rejected. There is a division of sentiment. If you should now conclude to submit the case to the Allies, I think that you would be solidly backed in that action, but that the papers would divide (probably a majority against) on the question of acceptance. If, on the other hand, you reject it you will probably be unanimously supported.

Since I wrote last I have talked with Dr. Rappard of Switzerland, now on the way to the United States with Mr. Sulzer, where he hopes to talk to you about a League of Nations. He is a cultivated and high-minded man with two years experience at Harvard. I hope that you will see him. I did not assume to know what sort of League you have in mind.

Mr. Rublee went with me to see some members of the French Administration who are doubtless sincere in their desire for a League of Nations. They say that Clemenceau will be for it, but I am not convinced. They say that he has discouraged talk about it, as he has thought it necessary to centre every thing on winning the war, and to avoid division of sentiment on other subjects.

I still believe that Lloyd George and Clemenceau are opposed to a League of Nations, and that France will come to it slowly, but much more readily than England.

Just one paper in Paris (L’Information) mentions the fact that Lord Brice “delivered a remarkable speech” yesterday on the League of Nations, before the Inter-Allied Parliament, but no part of it has got into print. A speech by the King of England at the same meeting was played up strong. 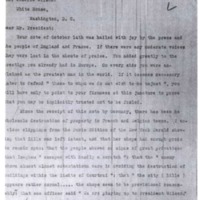