Tasker H. Bliss to the Secretary of War

Tasker H. Bliss to the Secretary of War

General Bliss reports on the situation at the front.

I am sending hasty lines to you and March by to-day’s courier.

I received your telegram about the presentation of the distinguished Service Medal awarded by the President to General Pershing. General Pershing happened to be here the day of its receipt and I conferred with him on the subject and we arranged to have the presentation take place at his field headquarters very shortly after the arrival of Mr. House who is expected in Brest the day after to-morrow (Friday).

General Pershing wants me to bring Mr. House with me on that occasion. At the same time he impressed upon me the fact that Mrs. House must not accompany her husband. He says there are absolutely no accommodations for ladies. We have arranged for a special train to meet Mr. House and his party and it will leave here to-morrow morning about eight o’clock for Brest. I hope to be able to go there and meet him in person. I think that we have made satisfactory arrangements for his accommodation on arrival. But it is for him to decide when he gets here.

I also received your cablegram of October 21st which came to me through the State Department, signed by Mr. Lansing below your signature, and through the American Embassy in Paris. I received it yesterday too late to reply to it that day.

You ask me not only for a summary of official civil and military expressions as I may have heard with reference to the present situation, but also for my own views, in order that you may lay them before the President. If any weight is to be attached to my views, this imposes a very grave responsibility upon me which, however, I shall shoulder as best I may. I have not expressed officially my opinion on subjects which are so largely international-political in character except when I have been expressly directed to do so,--as, for example, when my opinion was asked about military intervention in Siberia. In that case, however, the subject was about as much military as it was political.

I wish to God that the President himself could be here for a week. I hear in all quarters a longing for this. The people who want to get a rational solution out of this awful mess look to him alone. I have already told you that I have heard it repeatedly said that he alone can settle in any permanent way the Balkan questions. I have even heard my British colleagues say that they believe the only solution will be an American Protectorate there. In this dark storm of angry passion that has been let loose in all quarters I doubt if any one but he can let in the light of reason. It will be “ex Occidente lux”, and not “ex Oriente lux”.

I hope to get off a telegram to-day, as I promised in my cable to you last night. I have begun it and torn it up several times. It is a perplexing question to handle, at this stage, in writing. My views are, I think, pretty well understood here by inference although not by direct statements on my part. There are so few people with whom one can reason and state views without leading to an outbreak of passion. I think that the English are by far the most reasonable and that it is with them that our government can most probably come to an agreement as to what is right and just for the present and which will tend to the future peace of the world. The trouble is that the military element is on top, and if they are allowed to work their will they will do that which, if done by Germany, would shock the sense of justice of the world. And the worst of it is that what they would do would lead to a perpetuation of armaments and the standing threat of war.

When I send my telegram you will note that I do not believe that, in this peculiar case, the question of conditions of a so-called armistice should be left to the military men alone. The trouble is that it is not an armistice. It is an absolute surrender that we must have. But in order to get that surrender the conditions which are to follow it should be determined in advance and made known. All of the military propositions for an armistice that I have seen plainly embody or point to the political conditions which will exist after the so-called armistice is agreed to. These political conditions, imposed in the armistice, will be doubtless demanded by the political people in the discussion of final terms. At the same time, these political conditions imposed by military men alone may be such as to keep the world in turmoil for many years to come.

If the President’s idea of rational disarmament can only be realized it will simplify the whole problem. If all the nations will disarm to the extent that they properly can, there will be no necessity of taking away this or that or the other part of the defeated nation merely for the purpose of rendering it militarily weak. An international sense of justice can readily agree on taking away of such territory as does not justly belong to that nation whether it is armed or disarmed.

But no two men think alike, apparently, about these things. Everything is drifting. The military party is demanding more and more with every day’s success. There is nobody to impose any check. There is no free speech here and no free press, in our sense of the word. I think that the time is ripe for our government to immediately take the lead; to recognize that there are certain things that it is right and just and conducive to future peace to now demand; to recognize that there are other questions which can only be settled by the prolonged and earnest consideration and discussion of honest, reasonable, intelligent, and just persons.

If in this bewildering darkness a way can be pointed out and accepted by all, which will put a stop to the fighting under such conditions that it cannot be resumed I believe that Germany, still with a formidable army at her disposal, will agree to rational disarmament. Then there will be hope that all will disarm. But if certain elements of the military party have their way I fear that the rest of Europe will have to remain armed for an indefinite time in order to keep Germany in the position in which it is desired to put her, and in order to defend their own spoils against each other.
In my opinion the time has come for the United States to act swiftly and determinedly. I think that it should formulate its own views of what is right, right not only now but also for all time to come, and boldly put these up to its associates as a basis for their own agreement. In these, I think, should be included the doctrine of rational disarmament. I doubt if the governments are ripe for this but I believe that the common people are. And I think that the governments, knowing this, will listen to reason.

I shall try to write more logically and consecutively on this complicated subject the next time.

I inclose herewith the original document which I have received from the French Military Representative on the subject of the formation of an Inter-Allied Aerial Force.

You will notice that he asks me to send it in order to obtain the ratification of the project by the American Government as soon as possible. It shows the curious way in which business is done here. The document related to an agreement drawn up between the British Government and the French Government. I have no doubt of its being in correct form from the French point of view, but you will note that there is absolutely no authentication of the document. Why a document drawn up between two governments should be sent to me for transmission to my government, instead of having it go from the proper official bureau of those governments I do not see. I have told my French colleague that I have forwarded it because of his request that I should do so; but that I doubt very much if I shall hear further from it until it shall have been transmitted by either the British or French governments or both.

Please note paragraph 1 of the document, which states that the object of this aerial force is to carry the war into Germany by attacking its industry, its commerce, and its population. You will note that there is not a word to indicate that this proposed use of the aerial force is by way of reprisal. When, in some future year, the document is withdrawn from the archives of some State Department, it will look as though the governments which drew it up regarded bombing attacks upon populations, as such, to be a perfectly legitimate object of warfare. Even the Germans have maintained that their bombing raids on London, Paris, and other centers of population have been made only because those places were the centers of all kinds of war industries, or that they were places where large numbers of troops were concentrated, and they claim that those industries or troops are the objects of their raids and that injury to populations is incidental. But the document herewith makes the population, per se, to be the object of attack.

I inclose also a copy of a memorandum handed to me by Mr. W.B. Poland, Director for Europe of the Commission for Relief in Belgium, in regard to the problem of revictualling those portions of French territory and Belgian territory evacuated by the Germans. You will find it interesting.

I am also sending you a copy of the personal and secret instructions to General Franchet d’Esperay, Commanding the Allied Armies of the East, and to Beneral [sic] Berthelot, sent on a special mission to Roumania, both of them signed by Mr. Clemenceau.

I also send you (in connection with your request in a former letter) the last report that I have received on the subject of the Haviland planes fitted with Liberty motors. You will note that final trials have not been made and it looks now as though they would not be made. You will also note that the report states that the American aviators at the front agree in stating that the Haviland plane gives satisfaction.

I hope that you had a pleasant trip on your return home and that you have found your family in the best of health, to whom I hope you will present my kindest regards. 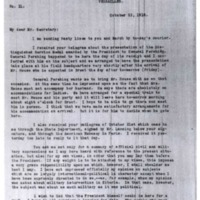