Secretary of State shares his concerns about the political situation in Europe.

The enclosed telegram from berne (No. 5237) you have doubtless read with the same feeling of concern that I have, especially as it fits in with other information which we have received as to the political strife in Italy and the growing antagonism which exists between the Italian and French governments. I am surprised that Nitti is not mentioned in connection with this rivalry between Orlando and Sonnino because I consider him one of the chief fomenters of trouble at Rome as the backer of General Diaz in his refusal to make an offensive without reinforcements from outside.

While I confess to little patience with the spirit which seems to animate the statesmen of Italy and cannot presume to pass judgment on the wisdom of refusing troops to General Diaz from a military point of view, I feel that the political situation demands careful consideration.

I know how the Chief of Staff feels about dividing our military strength and that he had thus far opposed any suggestion to send an American force to the Italian front. He speaks as a soldier and I would not for a moment question his military judgment for which I have the highest regard, but this seems to me to be more than a military question. It is a question of maintaining the morale not only of the Italian army but of the Italian people as well. We know from the way that they received Germany’s peace overture how weak that morale is, and I am very apprehensive of what will happen if they are forced to face another winter of war and privation without something to renew their courage.

In addition to the French military point of view, which is undoubtedly against sending troops, I believe that the increasing bitterness between France and Italy has blinded the French to the gravity of the Italian political situation and that the French Government for that reason accepted the judgment of its military advisers without questioning its wisdom.

However scheming and selfish Italy’s officials may be and however unreasonable may be the attitude of her military command, it seems to me that, if anything can be done, it should be done to remove the impression that Italy is abandoned by her Allies and the belief that France is hostile to Italian interests and is not anxious to have the Italians make a successful offensive.

In view of the conditions which have, according to all our informants, been growing worse and worse during the past few weeks so far as Italy’s internal affairs are concerned, it seems to me that the policy as to sending troops to that front ought to be reconsidered with due regard to political as well as military necessity. I believe that the situation is critical and that something should be done. Frankly I am by no means certain that the Italian suspicion of the French Government is entirely groundless. But whether it is or not I feel now that there is real danger in the state of affairs, although previously I was disposed to consider the pleas of the Italian Government for troops to be based only on a sentimental jealousy and not an actual need. 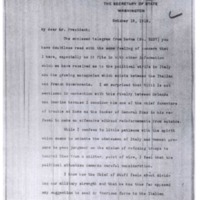