Vatican advises that Austria will soon have an answer for President Wilson.

Mr. Hearley, one of our best men in Rome, had a talk on October 4 with Ceretti, Papal Secretary of State, on some publicity matters. In the course of the conversation Coretti stated that Austria was planning a reply to President Wilson and indicated that the Austrian answer would follow these lines:

“First- Appeals Wilson direct and alone as consistent judge conflict and above possible egotism either time.

Fourth - Asks Wilson for public conference to discuss possible peace on such basis. Austria would cease explicit ignoring Allies in her appeals but would implicitly leave opportunity for Allied participation in such conference. Austria will begin making feverish attempts democratize internally and adopt many popular and social democratic measures. Ceretti criticised clumsy recent Austrian note and its untimely request secret conference. Same source clearly indicates Germany will rush democracy and to extent socialization of Government and come out undoubtedly on question Belgium, agreeing to Belgium’s absolute political and economical independence, restoration and indemnity and practically acknowledge criminality of invasion Belgian people. Ceretti asserted Wilson stronger among people of Austria and Germany and especially Austria than President apparently believes and world imagines. Pope thinks and says Wilson is real master situation in all fighting countries. However, Ceretti says that President while master sovereignty central powers should not forget keep watching individually and collectively Allies.”

I take it that this may be interesting to you. Hearley also states that the Pope is thinking of issuing some sort of statement largely supporting your position and that, probably, November 2, All Souls Day, will be the occasion. 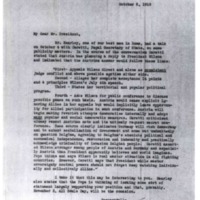