The central committee of the Ligue des Droits de l’Homme on Saturday afternoon received Mr. James Kerney, director of the American Committee of Public Information, and a personal friend of President Wilson.

They expressed the wish that the President of the United States should endeavor to bring about as soon as possible the constitution among the Allies of a league of nations and secure the publication of the precise conditions which the Entente considers necessary to the conclusion of peace. 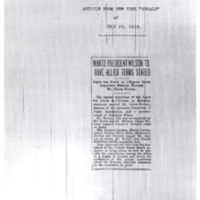