Some Americans in France claiming authority they do not have.

Apropos of your confidential letter written to me some time ago, in reference to the embarrassments caused by certain of those who come over to France, clothed with more or less official authority, in their unwarranted dealings with the French Government, I enclose copy of a news item recently appearing in the New York “HERALD”. It also appeared in substantially the same form in a number of the French papers. All those referred to in the article are prominent members of the Socialist Group of Parliament, whose activities have been mainly devoted in opposition to the French Government.

I was, however, left in the dark both as to the source of your information and the particular persons to whom you would refer, no names being mentioned in your letter.

As a general observation, I am glad to say that, with very few exceptions, those who have been sent over here by our Government for one mission or another have acted very discreetly and to much useful purpose. They have worked in complete harmony with the Embassy.

The most trouble may be said to come from certain Americans resident here who, entrusted with no official authority, yet, as a sort of super-imposed Ambassadors, seek to interpret our Government’s views to French officials and also to acquaint some of our people back home with conditions as they exist here. I would not attach much value to either their judgment or their work. One recompensing feature, however, it may be said, in such cases, is the fact that their very assumption carries with it, to those with whom they would have relations, its own negation of any influence.

In the instance which I bring to your attention, I would say that, without in the least questioning the motives of Mr. Kerney, who is a very likeable man, with every desire to be useful, and with whom I have had only the most pleasant relations, it would seem to me that he might be very wisely cautioned by those in authority in the Bureau which sends him, as to the proper exercise of his duties. Certainly his conception of the scope of those duties, judged from the character of his telegram No 4448 of July 13th, to Mr. Creel, a copy of which I enclose, seems to be a very broad one. There have been others, in addition to his concourse with nearly every member of the Ministry, differing in that respect in but very little degree. In practically all the French and English papers, whenever Mr. Kerney’s work has been mentioned, he has always been referred to as the intimate friend of President Wilson, and the inference has quite generally been expressed that on that account additional weight should be given to his opinions.

I have several times modified his telegrams, and in one or two instances declined to send them, always, however, with his full knowledge and approval. Wherever it has been possible, and whenever he has asked me to do so, I have sought to help him. However, as he is not attached to this Embassy, of course I have no authority to direct his activities.

With my kindest regards, I am,
Believe me, my dear Mr. Lansing,
Very sincerely yours,
Wm. G. Sharp 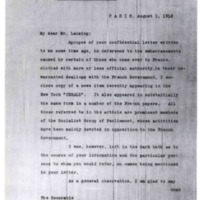