War Trade Board. For Hurley, Shipping Board: “Number 32 2. First immediately after our arrival two weeks ago Stettinius made arrangements that permitted me to commence my work at once. I have been most fortunate in being able to accompany Felton with whom I will remain until he leaves France. We have been accorded exceptional opportunities to become familiar with the general situation and tonnage requirements of our Expeditionary Forces. Have had conferences with members of General Pershing’s staff at Chaumont and Tours, have visited principal ports and interior and advance storage areas with officers of our army and French officials. Second. In compliance with your instructions I give below my general impressions. Will report in more detail from time to time as the work progresses. Third. The port situation is in much better shape than we had supposed. Certain of our port berths were unoccupied at every port visited, and in consequence I am convinced that many more ships can be placed in army cargo service at once, without materially increasing the lay over in French ports. The soldiers are required to wait for berthing space, it is usually because they carry heavy cargo, such as locomotives, or cargoes that must be unloaded and at certain port. Long lay overs are occasioned almost entirely by; A. Shortage of cranes and other handling equipment. B. Shortage of, and inexperienced dock laborer. C. Shortage of Railroad equipment. Gantry cranes, awaiting shipment at home, have been ordered forward, and every effort is being made to improve the efficiency of dock labor; consequently the rate of unloading should gradually improve at the berths now in use. Construction work is proceeding rapidly at Montouir, and at certain others points and the French have already promised to turn over to the army many additional berths, during the next few months. An exhaustive study of the entire port situation has just been completed, which indicates that a port capacity can be reached far in excess of the maximum assumed by us at home. The recommendations contained in this report, involving additional construction and the installation of additional handling equipment, will be acted upon promptly. This entire subject has been discussed at length by Felton and myself with General Pershing and members of his staff. Fourth. Every effort should be made to greatly increase shipment of railroad cars and locomotives. More rapid evacuation of docks will help the situation greatly. The short railroad haul to large base storage areas presents much more serious congestion. Cannot emphasize too strongly the need of cars. Fifth. I am convinced that ships are the limiting factor in General Pershing’s activities. A large number of additional ships could be used at once for the movement of horses, cars and locomotives, which will be needed in much larger numbers than we had supposed, and for many other supplies of which there is no shortage at home. Sixth. I am more than ever convinced that it is absolutely necessary for you to confer with General Pershing and witness the work that is being done. It has been made unmistakably clear to me that every resource of United States must be exerted to carry out the programmes which he has recommended. The maximum of sacrifice that may have to be imposed at home cannot be compared with increased loss of life and privation that may accompany other procedure. I feel also that Franklin should accompany you. The British are now working with the Inter-Allied Maritime Council on the question of tonnage requirements for our new military programme. Rublee and Morrow, with whom I have just conferred, are hopeful that in addition to troop boats some cargo boats could be secured from the English, especially if you and Franklin were here if only for a very brief stay. General Pershing, Stettinius, and Felton are most eager to have you come. They are entirely in accord with my conclusion that the insight gained in two weeks will enable you to take action which will clarify the entire tonnage situation and make possible thereby a military programme which will assure success. Day. Mac Fadden.” 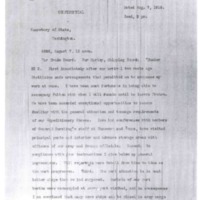