Creel protests to the president about foreign languages in the US.

The question of the use of foreign languages in the United States, written or spoken, is one that keeps calling for consideration and decision. The Administration has not yet spoken, nor has Congress legislated save with reference to the filing of translations with postmasters, but, nevertheless, local agitations are many in number and very definite in results.

One State, for instance, has proclaimed the following rules:

“First -- English should and must be the only medium of instruction in public, private, denominational or other similar schools.

Second -- Conversations in public places, on trains or over the telephone should be in the English language.

Third -- All public addresses should be in the English language.

Fourth -- Let those who cannot speak or understand the English language conduct their religious worship in their homes.”

In other States similar prohibitions have been put into effect, and sudden and fundamental changes are being worked not only in the school, the church, and the press, but in the whole social structure.

There does not seem to be any effort at distinction, the language of allied and neutral countries being put under the ban as well as enemy languages.

There can be no denial of the evil attempted to be cured. In our schools, our churches, our press, and in our social life, English should be the one accepted language, and this must, of necessity, be our goal. But the ideal of tomorrow cannot alter the facts of today. We must face and accept the condition that there are hundreds of thousands of foreigners in this country who cannot speak any language but their own. If we are to institute an instant drive against the use of foreign languages, either written or spoken, we shut off these thousands from contact with American life, driving them further into ignorance and aloofness, and utterly robbing us of opportunity to win their understanding and cooperation.

As you know, we have organized all of the foreign language groups along lines of patriotic endeavor, and to each in its own language are carrying the meaning and needs of America. A first response was the great Fourth of July celebration that pledged our millions of foreign born to the ideals and purposes of democracy.

This work, so vitally necessary and so rich in results already, will be sharply limited if prejudice continues to be substituted for orderly and intelligent procedure. In my opinion, the whole matter is one for deliberation and decision by Congress. If, however, communities feel compelled to initiate their own action, is it not fair and wise to ask that such action be confined to enemy languages, exempting the tongue of neutrals and friendly belligerents? 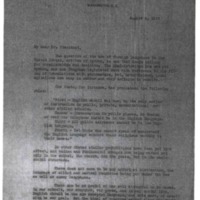