Letter of advice to President Wilson on the subject of Russia.

Appreciating your care and tact in which you are seeking to solve the Russian problem, I feel I should present a situation to you that I feel should be rectified, for the reason that there is an error of judgment of Provost Marshal Crowder.

Russia having stopped fighting with the allies and having entered into a Treaty of Peace with Germany, it does not appear to me that Russia can be classified as a belligerent nation or ally. In the Act of Congress approved by you July 9th, 1918, making appropriation for the army, Chapter 12, contains some new provisions concerning registration and drafting of aliens. Sections 2 of said chapter permits diplomatic representatives to issue certificates to aliens exempting them from Military Service. Section 4 exempts neutral countries.

On the 10th day of July, 1918, Provost Marshal Crowder issued an order under said chapter and act which reads as follows:-

“No. B. 1971. By recent act of congress citizens or subjects of countries neutral in the present war who have declared their intentions to become citizens of the United States are relieved from liability to military service on certain conditions in accordance with the regulations prescribed by the President. Pending receipt of these regulations instruct all local boards that they shall not involuntarily induct any registrant who is a subject of a country neutral in the present war and who has declared his intention to become a citizen of the United States but who has not completed his final naturalization. Declarant registrants of the following countries do not come within the terms of this telegram: Belgium, Brazil, Bulgaria, China, Costarica, Cuba, France, Great Britain, Greece, Guatamala, Italy, Liberia, Monaco, Montenegro, Nicaragua, Panama, Portugal, Roumania, Russia, Sammarino, Servia, Siam, Turkey, Subjects of Austria-Hungary and Germany should be still classified as alien enemies.”

I do not think Russia should be included in this list of nations, and I believe you so rule in matters presented to you, for the reason that we do not want to appear that we are taking Russians and putting them in our army at a time when they have a Treaty of Peace with Germany, doing so would bring about friction.

In compliance I would state that this suggestions is made in the interest of both nations. I am the only son of Benjamin Harrison, Twenty-third President of the United States, and am doing all I can to aid you in prosecutions in the war against Germany.

I served my country in the Spanish-American War, but the law now prevents my serving in the present war, on account of age, and I am now trying to sustain you behind the lines. 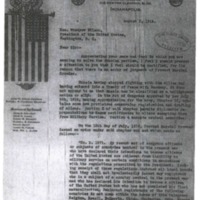