Doubtless you were surprised to receive my cable saying that my new station is a Bordeaux. I am enclosing a copy of an article which appeared in the Paris Edition of the Chicago Tribune, Dec. 16, which will give you some idea of what has happened. I do not know who wrote the article, but it is accurate in the main points. Of course, “Kushy-Kushki” is none other than Viskniskki.

It is difficult for me to understand how a man of Viskniskki’s type has been allowed to remain for so long in a position as important as that of Officer-in-Charge of the Stars and Stripes. The man possesses some secret power or influence that is a mystery to me. He is an arrogant, selfish, self-centered fanatic, who does not hesitate to use his power to gain his selfish ends, regardless of common principles of justice. He does not seem to know the difference between right and wrong.

The success of the Stars and Stripes is not due to Viskniskki. Credit for its editorial success is due to a plain private, John Winterich, the managing editor. Credit for the building up of its circulation to over four hundred thousand is due to a system planned by Capt. Waldo and executed by Milton Ayers. But Viskniskki has taken advantage of his position as Officer-in-Charge to use the paper for his personal glorification.

Things went from bad to worse. It would take a volume to tell you all about the man. But a few examples will give you an insight into his character.

The man has frequently made remarks showing his disloyalty to the President of the United States. These remarks have been carefully recorded by those who have heard them and will be published at the proper time.

He has frequently expressed contempt for many of the ranking generals of the A.E.F. You will remember my writing you of his having been placed under arrest for insubordination to the Commanding General of the District of Paris. The General filed charges against him, but for some mysterious reason he has never been brought to trial.

A remark he made about Franklin P. Adams will show you how he is affected by unreasonable prejudices: When Capt. Adams was assigned to the Stars and Stripes, Capt. Viskniskki made this announcement to the enlisted men with whom Capt. Adams was to work: “Frank Adams is a God-Damned cheap Jew who got $15,000 a year for letting other people write his stuff for him.”

Dad, Viskniskki is an unprincipled hypocrite.

When the armistice was signed he wanted to put over a circulation scheme that, to my mind, was plain robbery. Ayers and I refused to cooperate. He then reported to G.H.Q. that that we had been guilty of a breach of military discipline. So Ayers and I were relieved of our jobs as Treasurer and Circulation Manager, a Capt. McClatchy and a Lt. Miltenberger taking our places.

Meanwhile, fourteen of the enlisted men, representing the various departments of the paper, filed charges against Viskniskki. General Nolan, assistant Chief-of-Staff, came from G.H.Q. to investigate. The General had long conferences with the enlisted me, but Ayers and I were not given the opportunity of talking to him. Our testimony was taken by stenographers, and were were not even allowed to correct the stenographic report. I feel sure that, if we could have talked to the General everything would have been different.

At any rate, Viskniskki was ordered away to somewhere in Germany, and a Capt. Mark S. Watson, formerly of the Chicago Tribune, was made the Officer-in-Charge. Watson is Viskniskki’s close personal friend. He is, I think, a square man, but has been utterly fooled and misled by the two-faced Viskniskki.

In the “heat of the Battle” my promotion to First Lieutenant came through. Capt. Watson, however, informs me, that, owing to my “breach of discipline” I will be reduced to my former grade. As I was appointed First Lieutenant on a War Department order, I don’t think my promotion can be taken away without a struggle. But if I am to lose a grade because I refused to take part in a robbery scheme, I can stand the gaff. I have been guilty of no breach of military discipline and neither has Ayers. And I know I can prove it if I am given a fair chance.

Capt. Watson says that, “because of the excellent work I have done for the Stars and Stripes” I will be allowed to remain on the paper. I am now at Bordeaux, making cash refunds on subscription tickets held by troops returning to the United States. It is the same sort of work that has been done by each one of the one hundred and fifty men who worked under my direction when I was treasurer. Naturally, it’s a bit humiliating. Dad, I’ve worked like a dog to build up the Stars and Stripes, and I don’t mind admitting just between me and my Dad, that I’ve played an important part in its success. Watson admits it frankly. Viskniskki, in his recommendation for my promotion, officially records that I have worked faithfully and efficiently. Its a bitter reward for faithful serviee. I have given the Stars and Stripes my best. I have stood for a principle. But they have beaten me and my health is gone. My old nervous trouble has returned under the strain, and I can’t fight now. But here at Bordeaux I’ll have a chance to rest up, and when I’m in good physical shape again, I’m going back to the battle. Viskniskki is temporarily “out” but his name still appears on the mast-head, and I have every reason to think that Watson will return him to power. He will not remain the Officer-in-Charge of the Stars and Stripes, if there’s any justice in this world. I’ll fight him to the last. It may cost dearly, for he is a powerful man. I may come back to you a private, but, as I told you when I left home, I’ll come back with my head up.

Ayers has been sent to Germany on some unimportant work. Lt. Wilson and Lt. Cartinhour, who merely expressed the opinion that Ayers and I were in the right, were also relieved of their jobs. It has all been most unjust.

Please forgive me if I have written excitedly and disconnectedly. I will try to write a more reasonable letter when I am better. It is hard for me to write anything now.

In leaving Paris so suddenly I had to draw more drafts. There will be no more of them. Here at Bordeaux I can live very cheaply. I’m soory I had to call on you again, but, Dad, I just couldn’t add financial worries to all the other things I had to bear.

Please don’t worry about me. I’ll be all right soon. And always remember, Dad, that we are absolutely in the right. And you can go a long ways on a clear conscience.

My best love to you and mother. I wish you all a merry Christmas. It won’t be a very merry one for me. 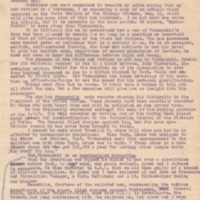